You can smell the boeries > NAG

Rugby nostalgia is a powerful phrase that should, for most South Africans, instil fond memories of the perfect boerie-roll braai, joining friends at the stadium, proudly donning your green and gold, waving a large flag, Madiba wearing the number 6 jersey, and, OMG, the Rugby World Cup 1995…

So, when Rugby 22 arrived at the NAG office, I gathered up my game, handing off Regardt, pushed the blindside, grubber kicked and sidestepped Cody, only to be dump tackled by Cheryl. A maul formed around the coffee machine, and I simply had no choice but to gently persuade Luke out the way by shoeing him, just a little. No one noticed the totally legal action and with the prize in my possession, I slid over the whitewash that is my office space and smiled politely at James as he tried the ankle tap me, what a noob. TRY!!!!

This is French developer, EKO Software’s third Rugby release, that has vastly improved in all aspects of the game since their first release of Rugby 18, and in my opinion, whilst not being perfect, is the best rugby game I have ever played. It feels fluid and closely resembles modern rugby, even down to tactical play and does not feel forced. 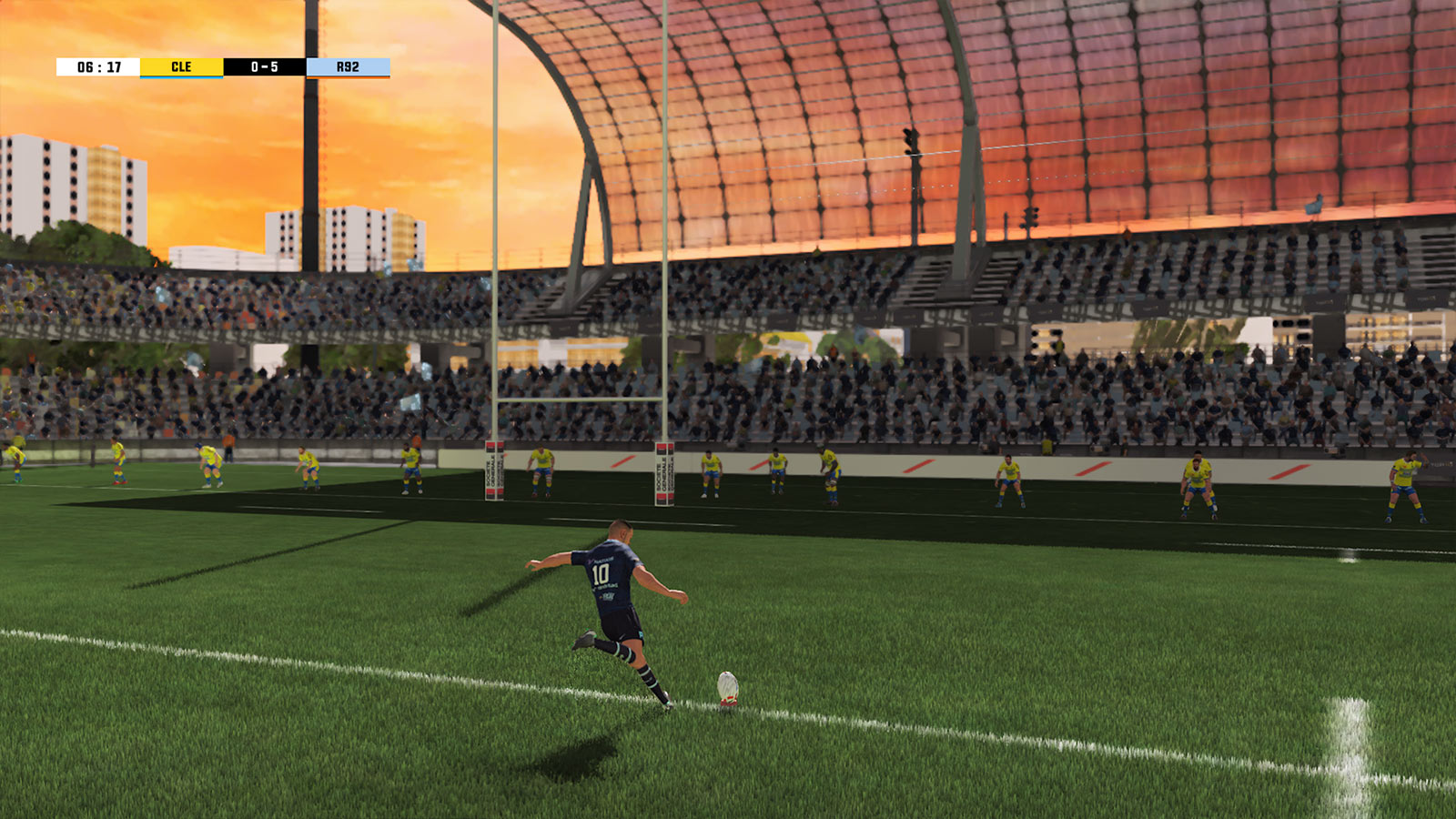 The graphics are acceptable, but I do think we deserve better on a new generation console, and whilst most of the player’s faces are easily recognizable, they do, at times, look as though their Botox session was overdone, especially as they try to force an expression that cement may find easier to achieve.

On-field graphics is the most important thing though, and that looks cool, although I did often lose sight of the ball during frenetic play on a 65-inch 4K LCD. That said, I bet most people have lost sight of the ball whilst watching the Boks clap the Wallabies, who, by the way, are part of the teams licensed to this game. Whilst on that subject, the sixteen national teams available are New Zealand, Samoa, Scotland, South Africa, Tonga, USA, Wales, Argentina, Australia, England, Fiji, France, Georgia, Ireland, Italy, and Japan. You are also afforded the opportunity to compete in France’s first, or second division tournaments with teams like Lyon and Montpellier, in England’s Premier League, or the Celtic League, featuring the Bulls, Lions and other well-known SA provincial teams. For those of you that played Rugby 20, I’m sure you’ll agree that Southern hemisphere inclusion is the real reason this game is better, right?

After installing Rugby 22, the game forces you into multiple, much needed, training sessions that include passing, tackling, scrums, lineouts, rucks, and goal kicking. Unfortunately, this is where I started hearing Pac-Man dying sounds repeating in my head. A prolonged period of frustration set in, and I secretly wished James’s ankle tap landed. However, I pushed through the practice because that’s what winners do. That, and Regardt threatened to take away the NAG Xbox Series X. Crack on then. 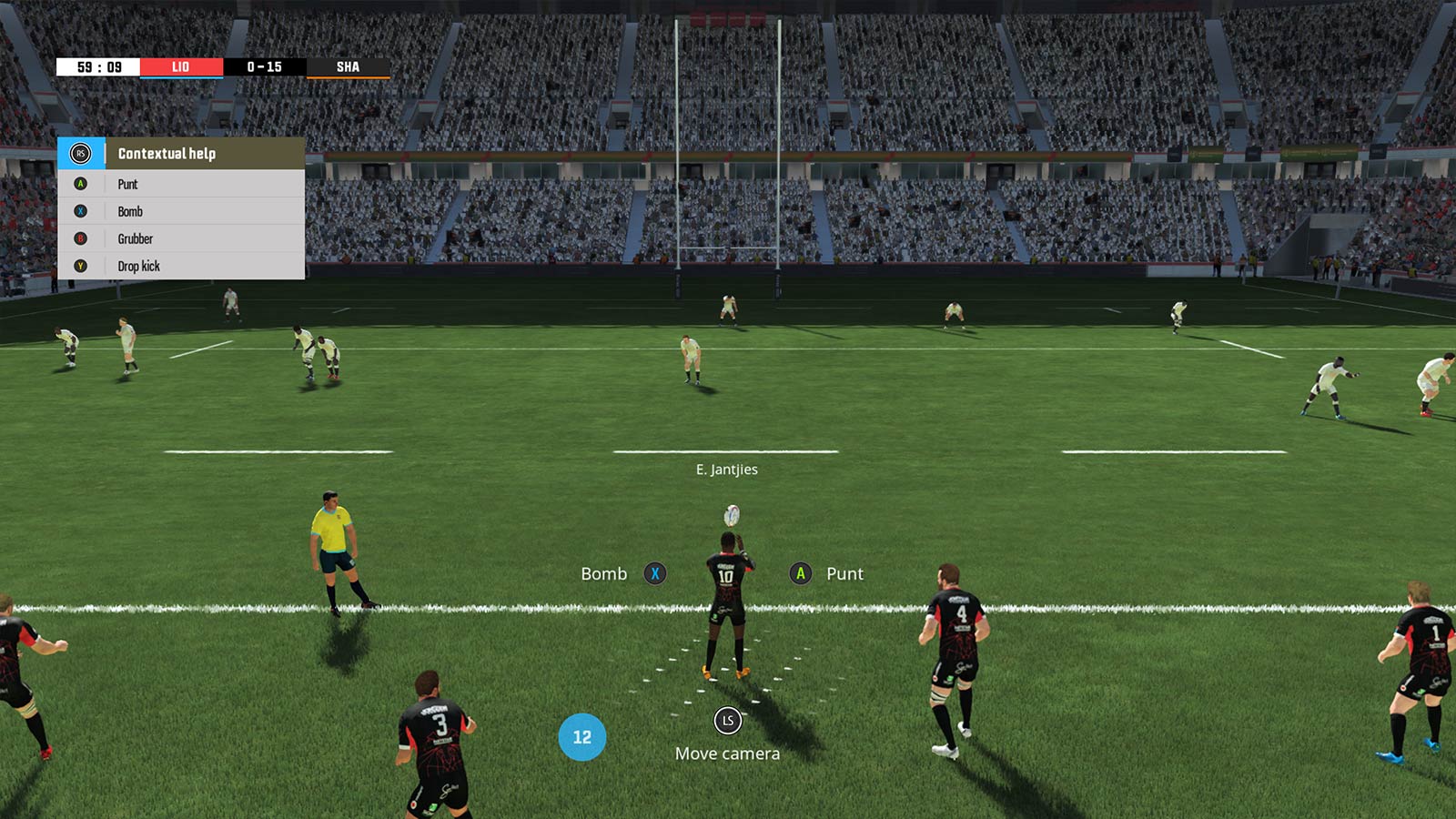 Depressing the left and right bumpers dictates the direction of your pass, and the longer you hold them down, the further the throw distance. Easy, right… lol, I managed a measly, 4 out of 21 successful passes on my first session, and by the end of it, managed an average of 17, yay.

Forming a ruck, and how you enter with supporting players, is key to successful ball management, whether you are trying to turn it over, or retain possession. Fortunately, you will get to hone this skill during practice without an opposing team hassling you for the ball. Pushing B on our controller gets one of your players in and then remember to push up on your left stick (LS) to get them to hit as they enter the ruck. Right, now the tricky part. Multiple players. During a pressure game.

You will need to master multiple players from your loose forwards to enter, else it’ll cost you ball possession, and timing is key. This is where frantic B and LS button spamming kicks in, and during this frenzy, you will need to quickly decide what you will do once the ball is out, pass to your kicker?

Well, you will first need to get your number 10 in position, just behind your number 9 for a perfect drop goal or grubber to your winger. Ready? Quickly tap A and then pass it with your LB or RB, but don’t hold the button in too long, you run the risk of an overthrow. Alas, the attacking side has spotted your move! Another jerk!

It was at this point in my experience that I started loving Rugby 22. It took time to get to grips with the sheer complexity of each passage of play, but that is rugby, right? It isn’t soccer, cough… I mean, football. kick the ball Don’t be offside. Don’t use your hands. Don’t go for the opposing player, go for the ball. Act like you are dying when tackled. Penalty awarded. score. Easy.

The mechanics of Rugby 22 feels true to life and adds to the level of enjoyment it offered me. You will appreciate watching an opposing team mess around with your throw-in as they shuffle their players around. You will not experience a successful pass midway through a tackle by a defending player. Conversely, you will experience try-saving tackles, inches from scoring. I absolutely love that attention to detail. It means that scoring a try is achieved through hard work, multiple phases, and executing well-rehearsed tactics and set plays.

Getting the ball to your winger, that has just been substituted, against a tired or injured defending scrummy, will make the difference between a try or another ruck. The speed and strength of play extend to better teams as well, so playing a warmup game between the All Blacks and a club team, such as Bordeaux for example, will be extremely one-sided.

There is a stamina gauge for each player that directly impacts the game, in the short term, and long term, depending on how many phases of play, how many times a particular player is used during a crunch period and whether you are constantly depressing the sprint button. Your player will get a second wind when play calms down to a mild panic, however, players do tire throughout the game, some more than others, and this is further accentuated by certain actions. Furthermore, injuries such as tackling whilst running at full tilt, will reduce your player’s effectiveness and should you not time the tackle perfectly, when coming from a little further away, could trigger a dangerous tackle, and may even cause a severe injury. Plan your substitutions. It is a critical and strategic component of RL rugby and so too within this game. 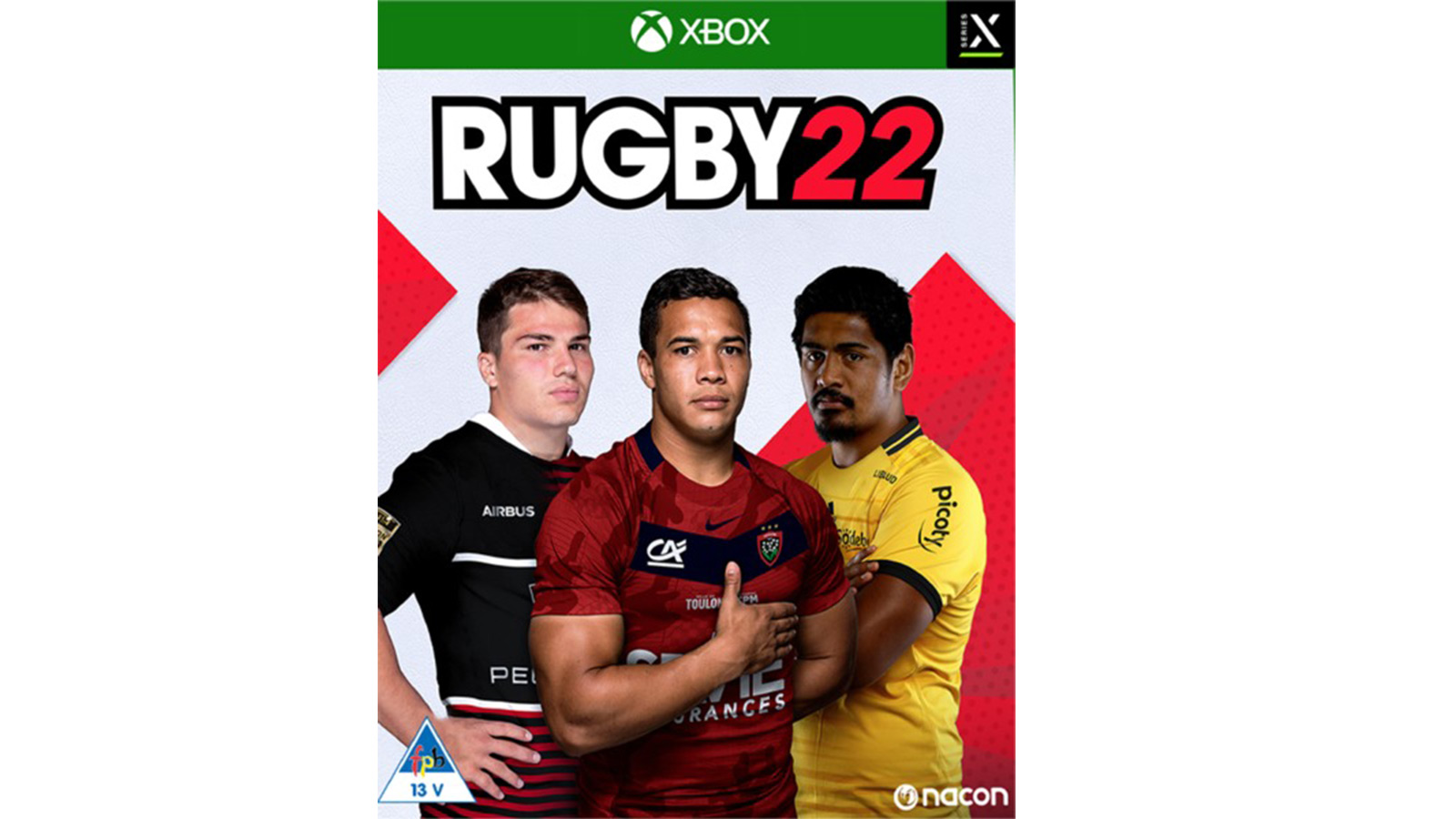 In career mode, you get to manage your team through the league, to ultimately face the top teams of the world. This extends to your teams’ finances by signing players, playing friendly matches, implementing training sessions and defining your tactics and set plays prior to each match. Upgrading your staff members and training individual players to help them perform better on the pitch is a welcome addition to the game.

The game also uses currency and skill points to achieve upgrades, as well as an option to invest money into how many tries you think your team will score in an upcoming game. By investing in your team, you create an objective. Achieve the objective, and you get your money back, as well as profit on that investment. It feels like betting but doesn’t actually use the word, but totally is betting but without real money.

Rugby 22 will pull you in, and you will struggle to shut the console down, primarily because it’s a social game, that we all desperately need, now more than ever. It will fill your home with high-pitched screams and roars of laughter because it is loads of fun. It is extremely satisfying beating your bestie at anything really, but playing a game we love so much, tastes so much sweeter. Each game you play will be very frenetic, it is fast-paced, and you will often find yourself losing sight of the ball as you frantically try remembering all the buttons you need to press, and that won’t bother you. Simply put, I can’t remember when I last had this much fun with mates, win, or lose.

Overlooking the weird faceless player selection when building your team, and being tough for newcomers so they feel like they are button spamming when that is totally what you should not do, EKO Software’s Rugby 22 on an Xbox series X, a large screen, good mates screaming and laughing, the smell of quality wood burning in your braai and ice-cold lagers is a perfect combination. You will not be disappointed.

Cheslin Kolbe in on the cover of the best rugby game to date!

Loads and loads and even more loads of fun, with mates

Not a simple game, even if you are the best couch rugby player on earth and every ref’s decision is incorrect.

Graphics could be better