The vampire armies in Evil West aren’t going to take themselves down, so it’s up to Jessie Reintier and the Reintier Institute to deal with this undead menace. Through the course of a 16-mission story, this one-man Rambo of a Gunslinger will face all sorts of twisted creatures from folklore and other shambling monstrosities that Flying Wild Hog has come up with.

The story is pretty straightforward. Vampires bad, Humans good, go punch the Vampires. Plus there are a lot of collectibles dotted around that provide some healthy bonuses to those that might need them. To make sure you’re not missing out on what to do, where to go, and how to do the puzzle, here’s a comprehensive walkthrough of Evil West’s first Chapter.

Fresh off of sabotaging a Vampire train as it crossed a bridge. Jessie Reintier hits the ground running as you’re sent off to investigate the crashed and mangled remains of the locomotive. Heading straight ahead and following the chains around the cliff face and continuing along the trail will lead you to the first swinging interaction tutorial. Push a button, Jessie does the rest.

After doing your best Tarzan impression, drop down, turn around and collect the Buck’s pickup gold stashed right behind you before continuing on down the trail to your first combat encounter with a single Infected Vessel. Continuing on from there through the crash site there will be three more Infected Vessels waiting. Punch them into paste and pause briefly in the carriage to the right of the arena as you exit as on the left side will be your first collectible item, a Fragment Of Inventory explaining the contents of the train. 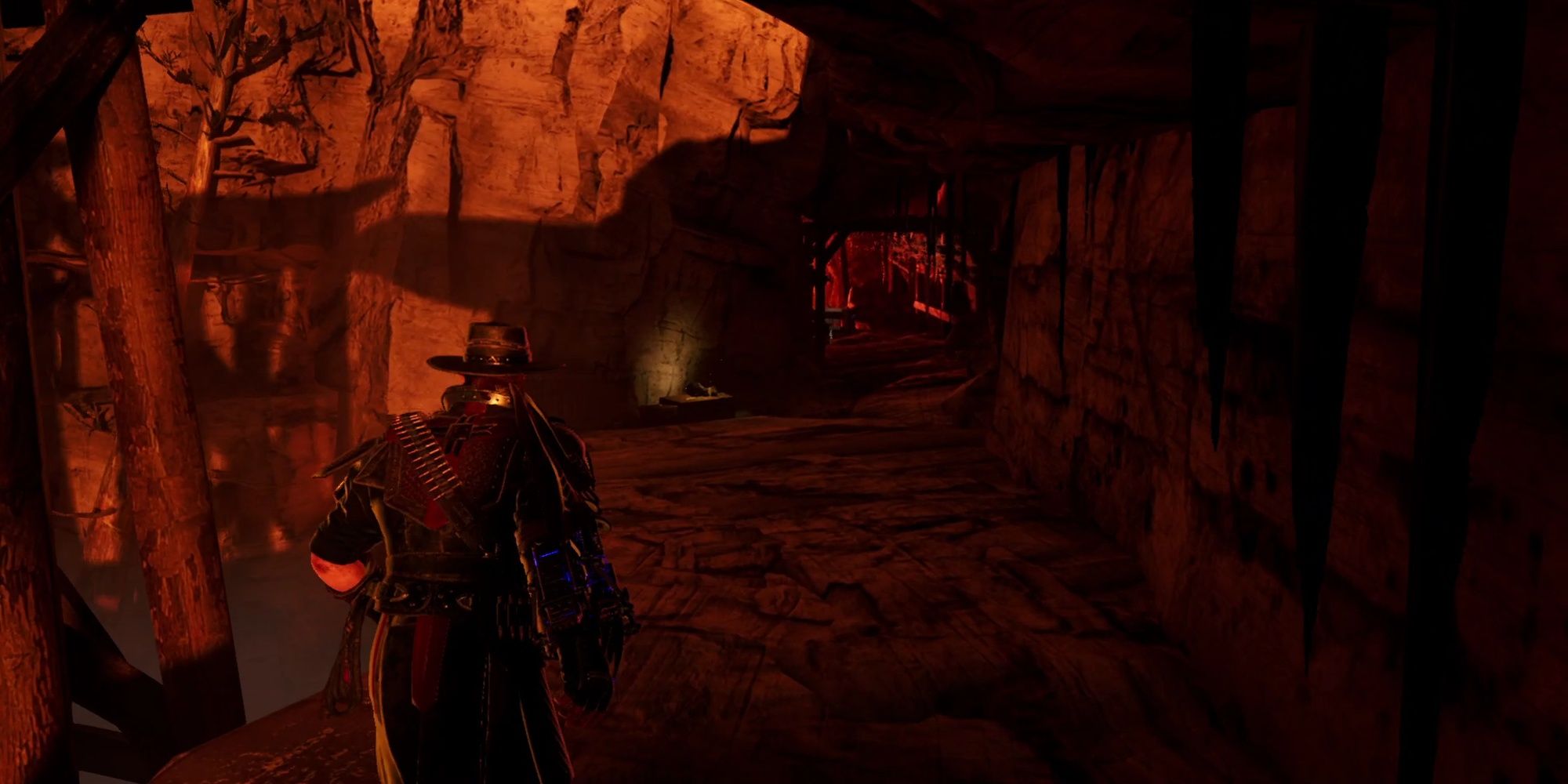 As you enter the mine after the train cars, make sure to grab the Buck’s pickup gold on the left, it’s hard to miss, but it’s 41 bucks. Following the tunnels, the game will begin teaching you some more moves, such as the Hero Punch. Which you can use on the two Infected Vessels waiting inside in a small web-covered arena. There are also extra Infected Vessels hiding inside the coffins inside this room but they attack one by one. Exit the caves and continue downwards, battering the Infected Vessel that’s not paying attention and dealing with the extra ones that drop down in an ambush.

Tips: The Cannon Ball Punch can be a little finicky and it’s not always the most reliable as it works on smaller minions. There are better moves in your combo list, so don’t worry about this one too much.

Swing onto the bridge and turn right to grab 47 bucks from a Gold Stash before dropping off the bridge into another arena fight (you’ll start to notice a pattern here). This is where you learn the Cannon Ball Punch and you can use it to launch the Infected Vessels the fight throws at you into the various spiky destructible sections of the room. Continue on from there ever downward and you’ll be introduced to your next new enemy type, the Jenu Giant. This is where you also learn the ability to interrupt the flashing unblockable special attacks of certain enemies. Murder him, learn about finishers then exit to the next big fight room, briefly pausing to grab the Buck’s pickup on the right. 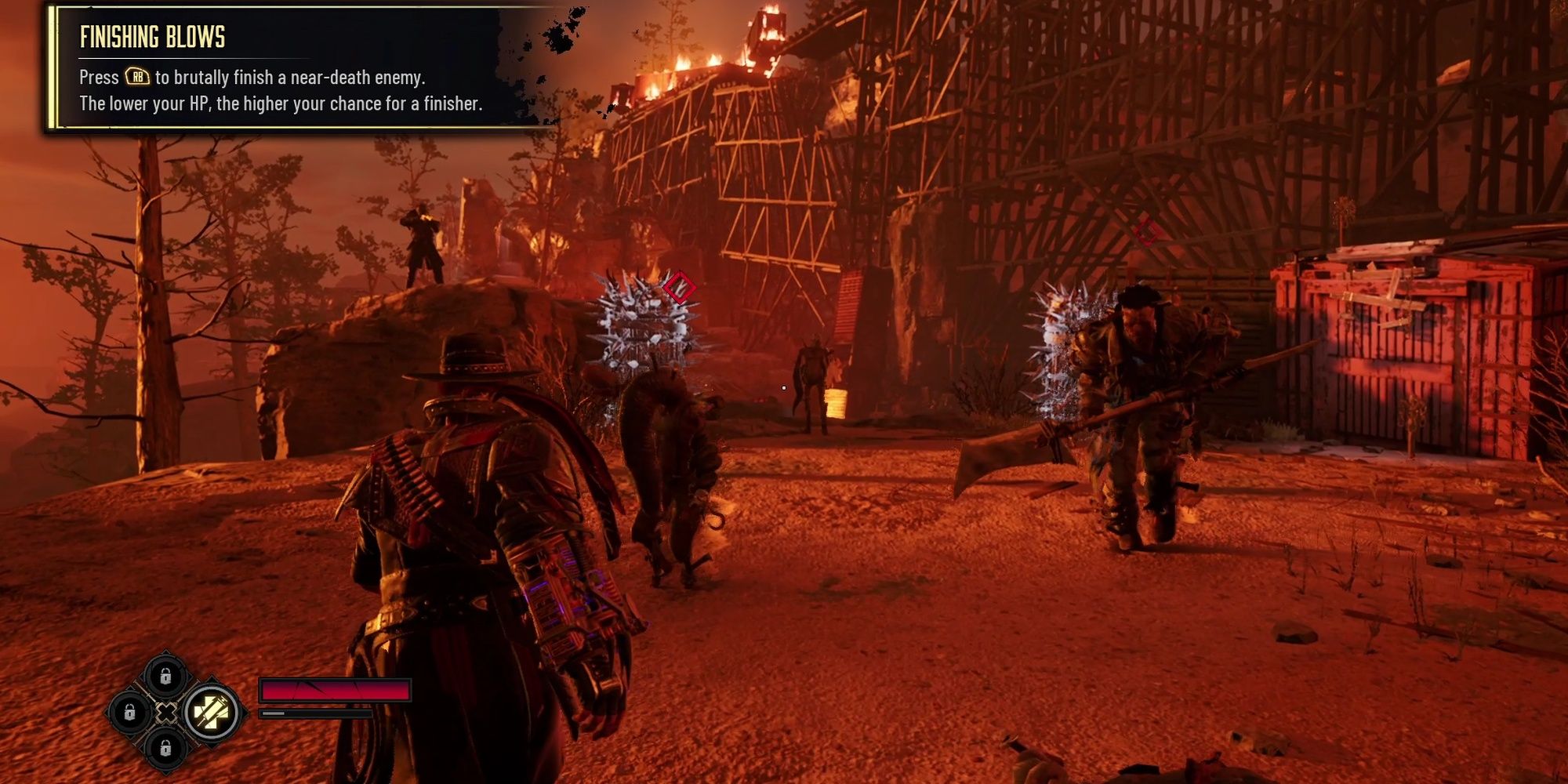 This fights going to be a little tougher. The level has been spoon-feeding you enemies and moves to this point and it’s time to test if you’ve been paying attention. There’s a big Jenu Giant and two Infected Vessels at first, but more will continue to spawn in for a fairly brief fight. But you have Edgar Gravenor providing you backup with his rifle. He does very minimal damage and is more of a distraction to draw aggro, so pull enemies close to him if you need a distraction.

Finish the fight, cross the train, and continue on down the path. In the burning wreckage on the right there’s a lore collectible that acts as an exposure dump, it’s Chester Morgan’s Letter. Grab it and then keep going. Cross the log, watch the bridge blow up some more and you’ll be introduced to the reindeer revolveryour first ranged weapon.

the reindeer revolver is used for extending combos, juggling, and fanning the hammer for wide shots. It doesn’t do small refined aiming. But its ammunition is infinite. 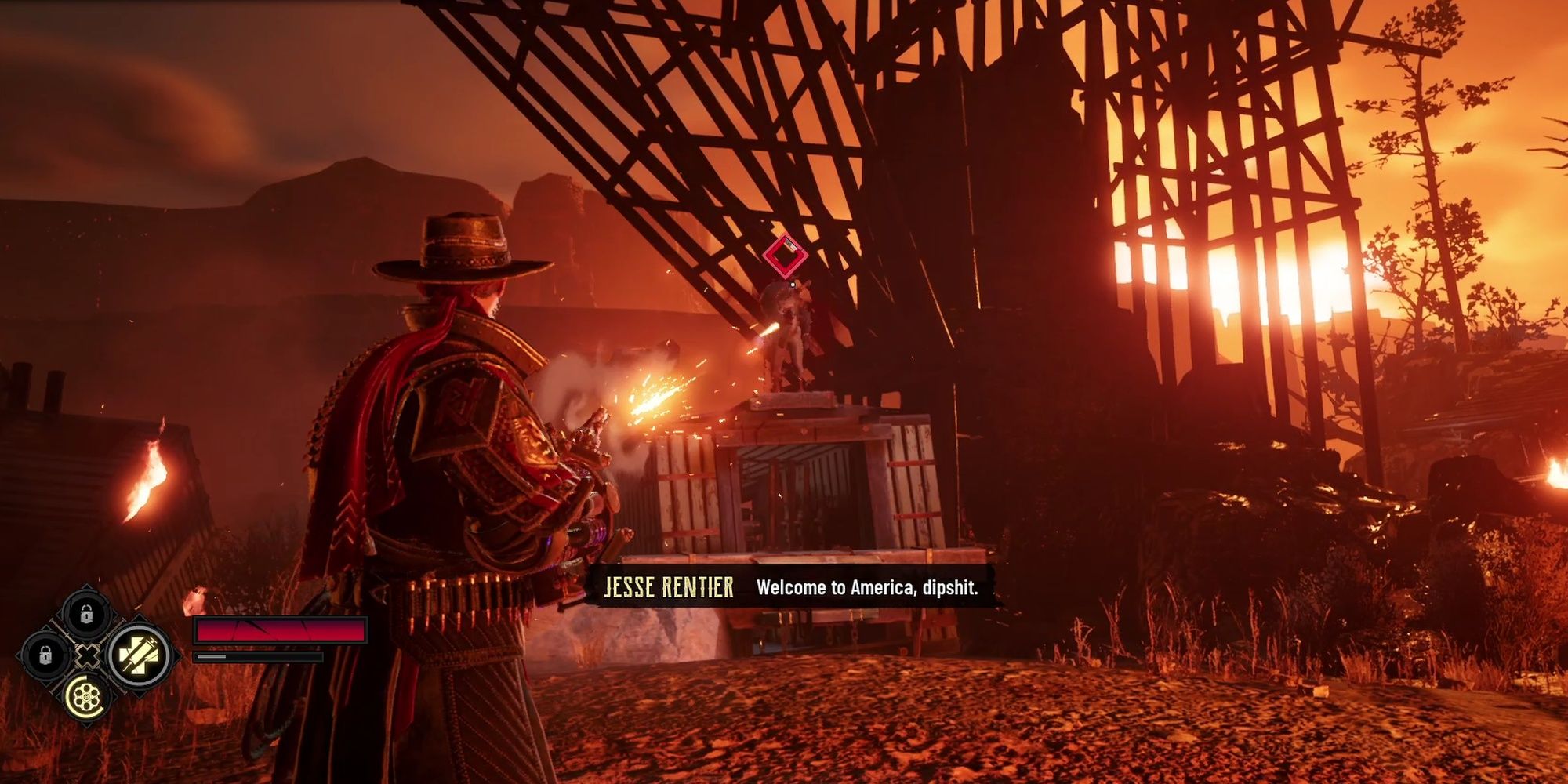 There’s on Infected Vessel standing nearby to test your new reindeer revolver on and after dispatching him some more will crawl out of the ground followed by two large Jenu Giants. Enter the crashed freight car and punch through the destructible panel at the rear of the carriage to continue. On the right there should be coffins in a train car on its side. Use Jessie’s whip to pull them down and create a bridge.

Cross the coffins, hop up the rail bridge, and deal with the two Infected Vessels hanging out on the cliff side. There’ll be a long ladder to climb and at the top of it a path leading to some Buck’s Gold hiding inside a destructible crate. Go under the nearby railcar that’s dripping with ichor and continue onwards, briefly cutting a right before you begin to grab the Buck’s Gold on some boxes nearby.

Climbing up the cliff by following the silver chains will lead you into a big brawl with a lot of monsters with your friend Edgar Gravenor lending aid again by tossing in sticks of dynamite. These will appear as red circles on the ground and standing in these will damage both you and the Ghouls you’re fighting, so stay out of them if you can. You’ll be battering through Infected Vessels other Jengu Giants for a short while before being introduced to your first boss, a huge and bloated Carrion Husk. It’s a creature that will become an Elite mini-boss type enemy in later fights and it’s big, dumb, and incredibly tanky.

It’s main threat is a big AOE stomp and a wave of damage when it slams the ground. Its susceptible to all types of damage so you can punch it or pick at it with your reindeer revolver. If he gets to close he can annihilate your health bar so punch and move. Your buddy Edgar will also take potshots with his rifle and toss dynamite at it, so you can cheese it out pretty easily if you’re struggling. Once it’s destroyed, head over to the carriage to find Chester Morgan, a weasly little Vampire that is going to become a sort of ally to Jessie as the game goes on. But for now he’s the Hunter’s hostage, and the only lead on what the Vampires are up to. Activating the interactable mark on the Freight Car ends the mission. Job done, onto Chapter two: The Raid where things get delightfully more violent.

NEXT: Evil West: The Best Perks