After a grueling Play-In Stage, which concluded on Sunday 12th June, The Group Stage for Stage 2 Valorant Champions Tour APAC Challengers will kick off online tomorrow, 15th June. We got the last four teams for the APAC Group Stage from Play-ins.

These 16 teams are divided into groups of four. Out of each group, two teams would qualify for the playoffs, and the teams would battle it out in a Double-Elimination bracket similar to the Play-In stage. 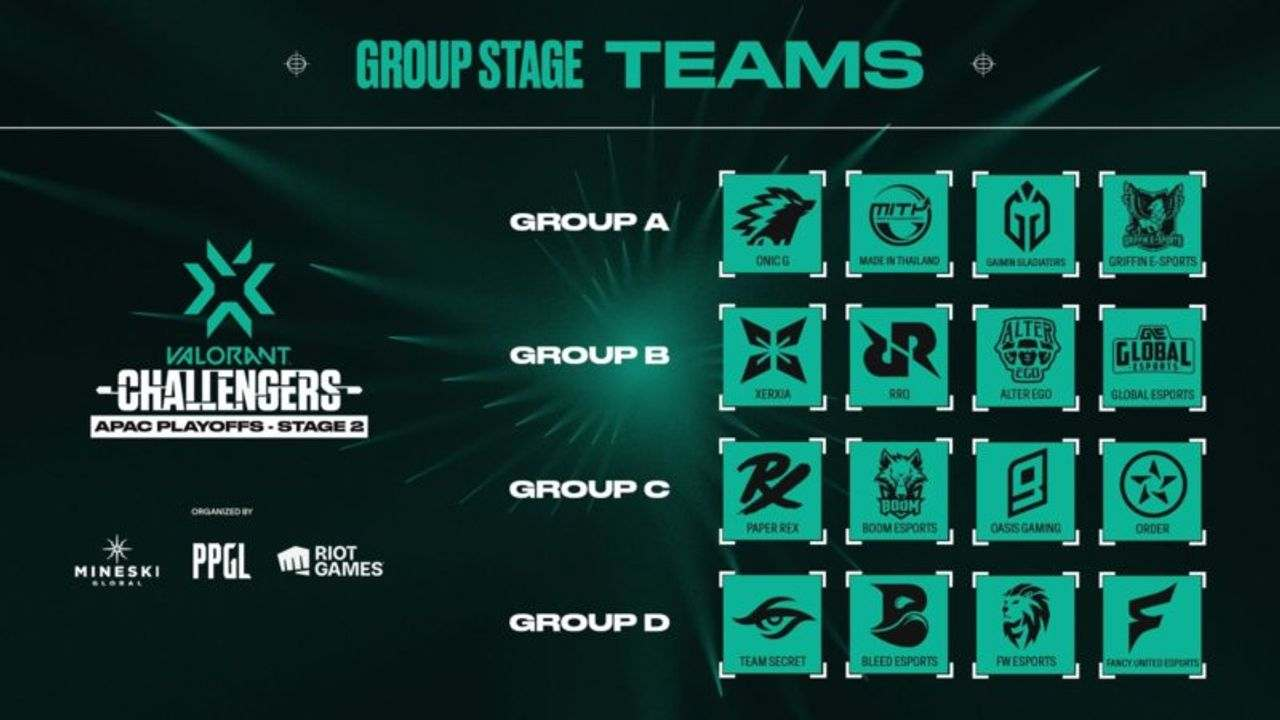 The four groups are as follows:

The first match starts at 03:00 AM GMT with Group A, where the second seed from Malaysia/Singapore Gaimin Gladiators would take on Honk Kong/Taiwan’s top seed Griffin Esports.

The teams from each group would bring all their potential and try to make it to the playoffs.

Out of group A, Gaimin Gladiators from MY/SG seem like a strong contender as we all know the MY/SG region is strong. Gaimin Gladiators beat the tournament favorites, Paper Rex, in the VCT MY/SG Qualifiers, Sending PPRX to the lower bracket. ONIC G would make a similar case for Indonesia. The Indonesian top seed is likely to make it out of the group.

Group B has the three-time South Asia representative Global Esports who would have to take on the Indonesian second seed Alter Ego tomorrow. While the second seed from last time’s APAC Challengers Xerxia would ensure they go back and represent APAC again. RRQ has made a case for itself in the Play-In stage and would want to win the whole thing.

The first seed of Stage 1 VCT APAC Challengers, Paper Rex, would be still the tournament’s favorites with being the best team out of MY/SG. They made quite an impactful run in Masters Reykjavik.

Order, the best team from Australia would also bring the full force of Oceania with them. Oasis Gaming from Philipines is also a strong team and is likely to make out of group C. BOOM have already showcased their talents in the Play-In stage and would want to continue their winning ways in the Group Stage.

The final group has Team Secret, Fancy United, FW Esports, and Bleed battling it out for the two spots. Bleed had a solid and dominant Play-In stage run and would want to win against Team Secret. Team Secret managed to impact the Valorant World and took the Valorant world by storm at the Champions.

Though Vietnam couldn’t show a strong performance in Play-Ins, Fancy United would make a case for the region. The second Thai seed FW would also put their best foot forward to make it to the playoffs.

The Group stage would last till 20th June, with the matches starting at 3:00 AM GMT daily, and the last game starting at noon GMT. There would be four games for the first two days and three for the rest.

All the teams would try to win their opening game to get an advantage early and would need only one more win to qualify. Let the battle for VCT APAC Challengers Playoffs begin.