Coming tomorrow is the Uncharted: Legacy of Thieves Collection, a set of updated versions of Uncharted 4: A Thief’s End and the standalone expansion Uncharted: The Lost Legacy. Many reviews have already appeared online and it seems that the collection lives up to expectations.

The PlayStation 5 version has an average rating of 87% on Metacritic. Uncharted: Legacy of Thieves Collection will also be released for PC – no reviews of this version have been published yet.

The updated editions of both projects do not introduce any changes to the gameplay, only improve the graphics. Therefore The most important thing is how this collection looks in action and how it compares to the original versions released on PlayStation 4. These issues are presented in the video created by the editors of Digital Foundry.

According to Digital Foundry, the difference in sharpness between Fidelity and Performance isn’t significant, thanks in large part to good use of post-processing effects like Depth of Field.

Performance mode forces the game to run at 1920×1080 resolution, losing a lot of detail, but it’s the setting that Digital Foundry editors liked best, as the 120fps it offers is excellent for gameplay, offer much smoother controls and the well-applied edge smoothing ensures acceptable image quality.

It’s worth noting that Naughty Dog chose not to use dynamic resolution, which changes depending on what’s happening on screen, in order to maintain the target FPS. 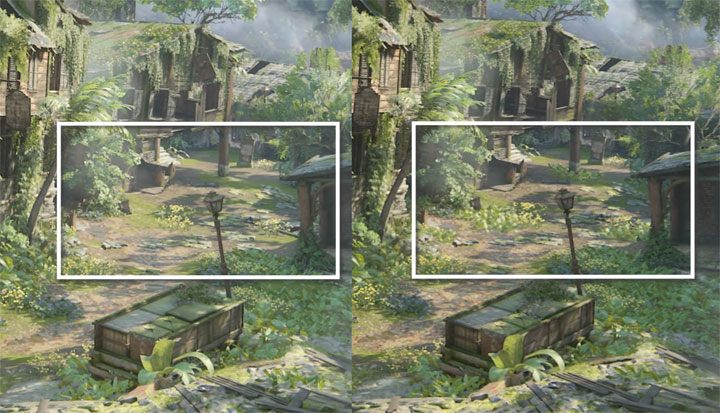 The changes are not limited to resolution and frame rate. The developers have also made subtle but useful changes to other visual elements. The PS5 version renders more detail over a longer distance, which not only makes locations look better, but also reduces the ugly effect of environmental elements suddenly materializing while exploring. Importantly, this improvement is present in all modes.

In addition, Uncharted: Legacy of Thieves Collection, has updated some textures, although most have remained unchanged since PS4. Slight improvements have also been made to shading and reflections. Motion blur has also been reduced. The problem is that it’s still set to 30 fps. So if you’re playing at 120 frames, the blur is almost invisible, reducing the cinematic feel of the graphics. There is also an option in the game’s menu to disable this effect entirely.

Uncharted: Legacy of Thieves Collection also offers much faster loading times. This isn’t noticeable during normal gameplay, as the game is constantly loading data in the background, even on PS4. This improvement can only be appreciated if selected parts of the campaign are loaded manually. While this loading can take up to 48 seconds on the PS4 (and 32 seconds on the PS5 in backwards compatibility mode), the native PlayStation 5 version takes just 3 seconds.

The PS4 originals mostly maintained a steady 30fps, but the PS4 Pro experienced dips of up to 24fps, which was noticeable to the naked eye, after an update to improve graphics for the newer console. Uncharted: Legacy of Thieves Collection does not have most of these problems. Fidelity mode delivers a perfect 30 fps, with occasional performance drops below 60 fps (1-2 frames). The situation is different with Performance+. In this variant, the game keeps 120 fps most of the time, isolated drops are hardly noticeable. However, there are a few very challenging sequences in the campaign where Unknown 4 can only display a little over 100 frames, and Uncharted: The Lost Legacy only around 90.

Also very impressive is the improved surround sound, which offers convincing effects when using headphones, and the improved DualSense control.