Two weeks ago, EA published updated rules for creating mods for The Sims 4. The change in the company’s approach has sparked quite a stir in the community. This is because the new rules prohibit direct financial gain from creating modifications.

The end of mod monetization

EA published the new rules on July 21, and since then they have stirred up more and more controversy in The Sims community. They include several key changes that are sure to affect modmakers.

First, the company has banned the advertising of mods that would be official ties to The Sims, Maxis or Electronic Arts. This also means a ban on the use of the series logo and trademarks.

The biggest outrage, however, was caused by the second change in the regulations. This is because EA stated that mods must be shared for free. Modifications cannot be sold in any way. They also must not contain microtransactions.

This was a severe blow to modmakers, who until now had earned money by making their works available in a kind of early access. Players could buy access to a given modification before its official release, and modders were paid for their work.

Now, however, this way of making money from mods has also become illegal. This is confirmed by astatements from EA’s help desk employee, who was asked about this by one of the modders. 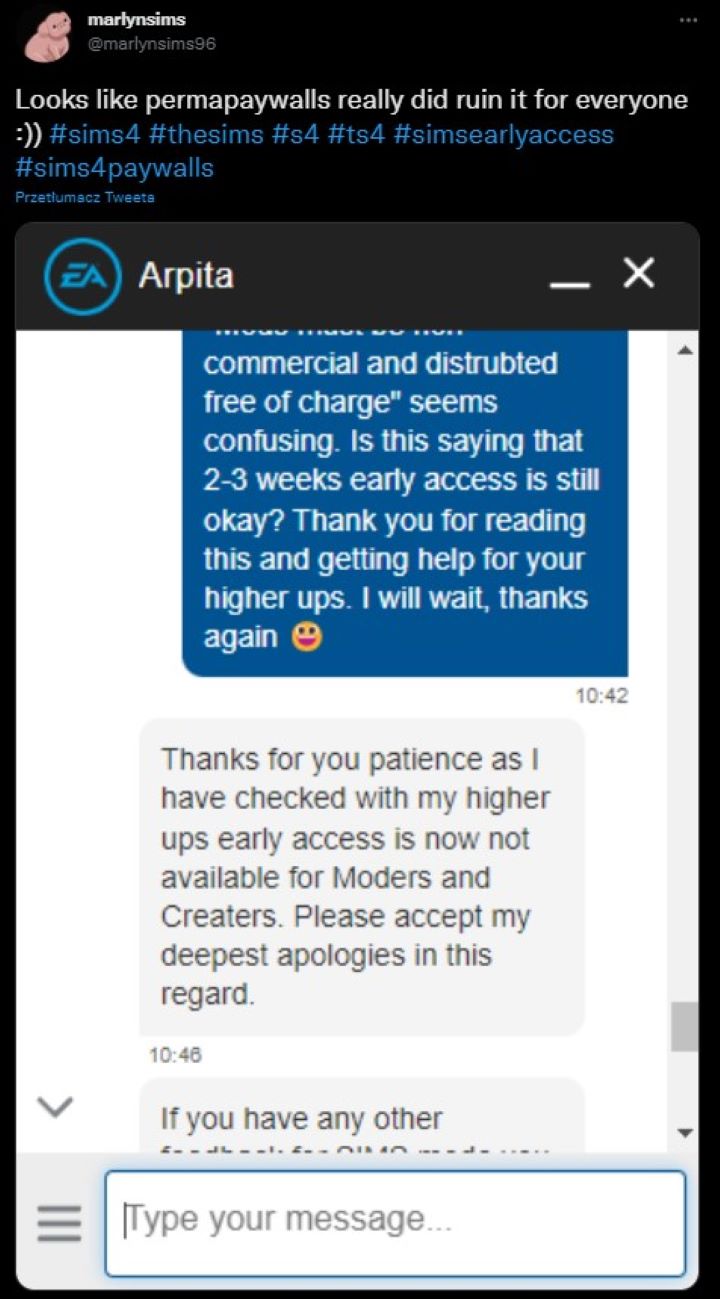 Of course, it is understandable that EA’s sudden change in policy toward mods has caused quite a controversy among gamers and modders. But is it really something unprecedented?

In essence, The Sims community was treated leniently by EA for a very long time. The company was turning a blind eye on mod monetization on a scale unheard of in most modding communities.

Suffice it to mention Fallout and Skyrim, boasting a whole lot of modifications. The creators of mods for the aforementioned games chose not to sell their works, because from the beginning of this procedure was illegal.

In their case, the only ways to make money from such creations were to set up accounts on services such as Patreon or collect donations in some other form.

In total, all permitted methods of earning on The Sims 4 mods can be found in the following excerpt from the regulations.

“Mods must be non-commercial and distributed free-of-charge. Mods cannot be sold, licensed, or rented for a fee, nor can Mods contain features that would support monetary transactions of any type. However, Maxis recognizes that creating Mods takes time and resources. Accordingly, Mod developers may recoup their development costs via passive advertisements and donations as long as:

The modders are resisting

Despite this, many modders vociferously oppose EA’s decision. Some creators, moreover, have decided that they simply do not intend to comply with the new regulations.

On their websites you can still find offers to buy early access to upcoming modifications or specific content behind a paywall. We are talking about modders such as AggressiveKitty, HeyHarrie and Sixam CC.

These creators do not intend to change their methods, as it is often referred to their only source of income. Apparently, on the other hand, they fear that they will lose the support of their patrons unless they offer them additional profits.

Now all that remains is to wait for a possible response from EA. For now, the company does not seem to be interested in enforcing the new rules.