Earn a seat at the Teamfight Tactics Set Six Mid-Set Finals, a total of 32 players competed for an invitation to the Set 6.5 Regional Finals.

Taking place from February 4th to 6th, players at the TFT Set Six Mid-Set Finals fought over the course of three days. With four invites to the Set 5-6 Regional Finals on the line and Participation in the Innovator Cup, the third day of competition, was a goal for all 32 players.

The mid-set final played on patch 12.3 was the last NA tournament played in set six. Each of the 32 players in the NA Mid-Set Finals earned their invites either through tournament qualifying points or by finishing top in one TFT Set Six Qualifier Tournament.

The format for days one and two at the TFT Set Six Mid-Set Finals consisted of six games each day, with lobbies being reset every two games. Each day the field was cut in half, and only eight made it to the third day.

Points were awarded to players based on placement in a lobby over the course of each game played that day and reset for the next day of competition.

DQA dominated Lobby B in the first game with a Jhin three-star gold collector and sètsuko scored a first place in Lobby A with Chemtech Urgot Carry. Aesah won Lobby C and Pawnup took first place over Lobby D. 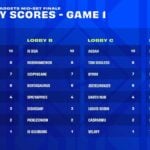 Lobby winners in game two were Socks, Dishsoap, Darth Nub and Kovanel. DQA earned his second lobby win in game three, taking him to the top with a total of 26 points. Close behind him were Kovanel, Aesah, Dishsoap, Sètsuko and Robivankenob.

Socks earned his second first place in the lobby in game five, taking him to the top of the leaderboard with 36 points. Over eight TFT The players went into the sixth game with a total of 19 to 25 points.

After a total of six games played, the 16 TFT The players advanced to day two of the mid-set final of Set Six.

This article will be updated after each game round for all three days of the North American Game TFT Set Six Mid-Set Final.