Quite a large anomaly has occurred on Steam. In the past few hours, Capcom Arcade Stadium has grown to be one of the most popular titles on the platform. The reason for this is the massive “farming” of Steam cards by bots.

Capcom Arcade Stadium is a free arcade gaming hub where you can purchase a variety of bundles of classic titles. It hit the market on May 25th this year and so far it hasn’t been very popular. According to data from SteamDBUntil yesterday only about 20 people were playing in it at the same time. Now, however, that number exceeds 450,000 players. As a result, the title became the third most popular item on Steam, overtaking such giants as Apex legends, PUBG and Grand Theft Auto V.. 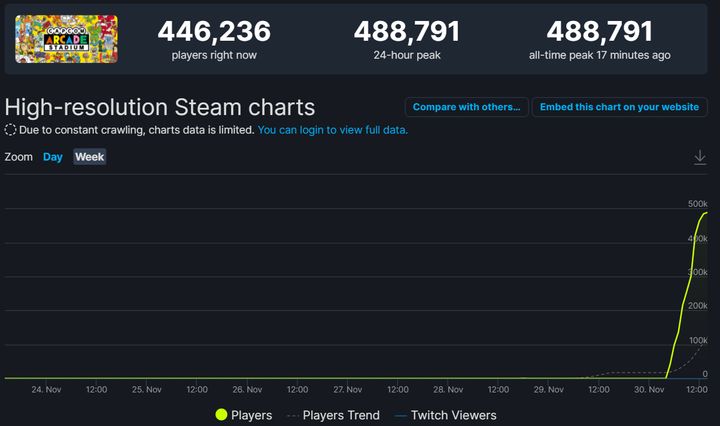 Capcom Arcade Stadium however, is not currently being promoted by Capcom. Plus, none of the major online content creators recorded anything about the title. So it is easy to conclude that this issue is due to the fact that Capcom Arcade Stadium was hit by a plague of map-generating bots.

As most of you probably know, Steam has a system for collecting virtual cards. We collect them while playing individual titles. We can keep our conquests to ourselves or sell them for cash to fund our Steam wallet.

It is worth noting that as early as 2017 there were programs that pretended to play a specific game. This made it easy to generate cards for sale.

At this time, Capcom and Valve have not commented on this matter. One thing is certain, however: this situation has had an impact on Steam’s popularity statistics.