A big storm has been brewing in the Minecraft community for some time now. A large number of players are outraged at the developers because of a certain change. With update 1.19.1, the developers can interfere with moderation on private servers.

What’s this all about?

A few weeks ago, Mojang announcedthat update 1.19.1 will introduce to Minecraft a new feature. With its release, developers would be able to interfere with moderation on private servers.

Users playing on such worlds would be able to report other players for inappropriate chat speech or dangerous behavior. They rules mention, among other things, hete, threatening others or making sexual allusions.

The submissions would then be reviewed by Mojang’s moderation team. They would thus bypass the admins of the private server. In addition, the moderators would not take into account the rules of the world in question, but would follow the predetermined rules.

A ban granted by them in turn, would apply to all servers, and not just the one on which the offense was committed. It could also be permanent.

However, the developers assure that they do not intend to constantly monitor the chat. They will intervene only when they receive reports. In addition, penalties will not be decided by bots. A team of people working at the studio will be responsible for this task.

What do the players think about it?

The gaming community was outraged by both the decision to change the moderation rules and the method of communication used by the developers. One of the developers stated that “we appreciate your feedback, but that doesn’t mean it will always influence the design decisions made by Mojang Studios.”

The statement did not please many people. After all, players felt that the company outright ignores their opinion even in matters that concern private servers, a segment that has always offered them the most freedom. 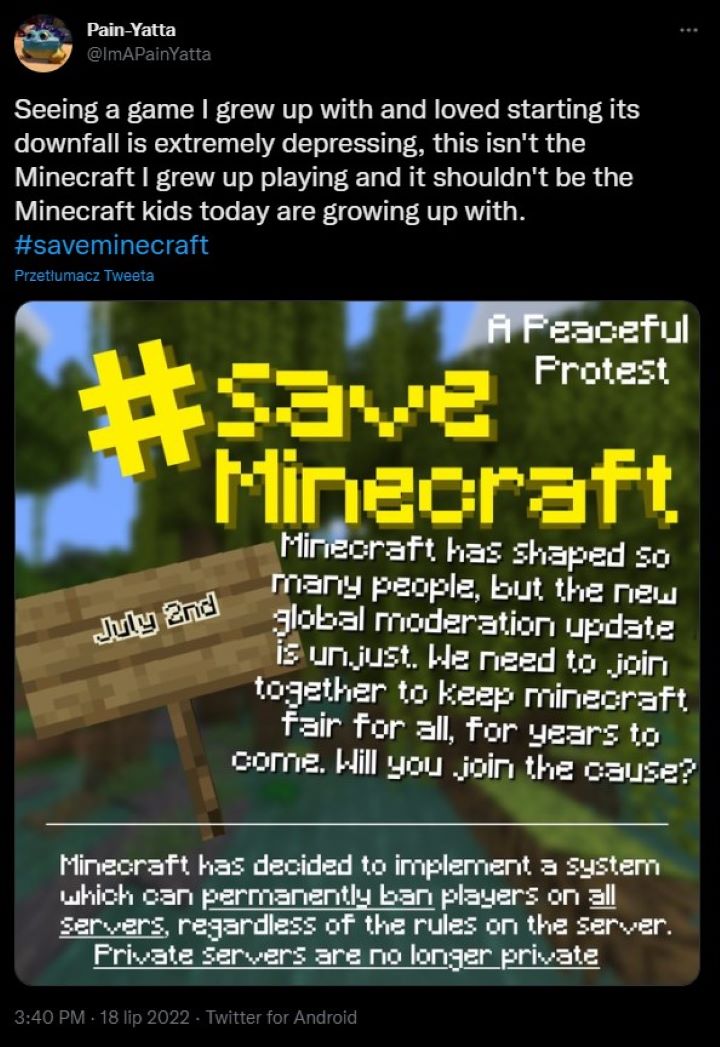 In addition, many fans do not believe the developers’ assurances. According to them, the rule change may cause many people to receive wrongful bans due to a misunderstanding of the rules of a particular server. They also believe that in the future, they may not only be concerned with general issues such as hating.

The players are also concerned about the lack of information from the developers about the possible possibility of appeal. The developers did not reveal how long it would take to appeal a moderation decision.

All this has left the Minecraft community in loud opposition to the developers’ decision. The hashtag SaveMinecraft has begun to reign supreme on social media. However, this is not the only action taken by the players.

Many people also started to download special modifications that prevent reporting via chat. These include No chat reports, a mod that changes the signatures associated with the messages sent. This, in turn, makes it impossible to link them to a given player and ban them.

Nevertheless, for the time being, it doesn’t look like the player outrage will affect the developers’ decision. The team have stopped referring to the controversy in any way for some time. The system itself, meanwhile, has been in operation for two days.

What Should Be Kicked Out of Minecraft? Fans Agree on One Thing

Someone Put A Gaming PC Inside A Wii