Red Dead Online Fans Fed Up With Waiting; Hold Funeral for the Game

Red Dead Redemption 2 is definitely one of the best games ever made, but the same can’t be said about its online mode. Red Dead Online fans, despairing at the lack of support from Rockstar, have decided to organize a funeral for the game.

According to a tweet posted by Red Dead News, the funeral of RDO is scheduled for July 13, this year. The date overlaps with the first release anniversary of the Blood Money update, which, although disappointing, brought something new. 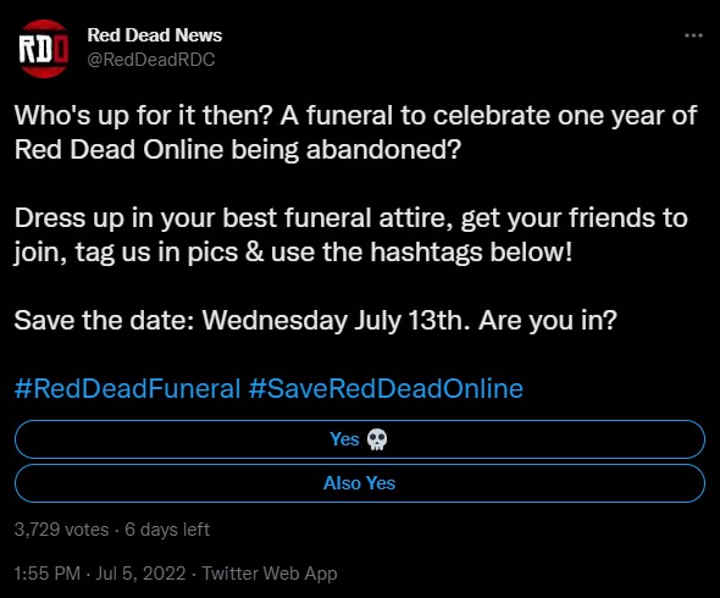 The funeral can be attended by anyone, and in fact, ideally, as many people as possible should show up. This is because it is another (perhaps even the last) opportunity to draw Rockstar’s attention to the lack of new content. Whether the action will have any effect will probably be revealed next week.

Blood Money – the beginning of the end

The last major update for RDO launched on July 13, 2021. Blood Money brought quite a few new activities (including heists, robberies and extortions). There were also three orders and operations.

However, time showed that Blood Money was far from a success, and players quickly became bored with the update. Later, minor updates appeared, but they changed little.

This hashtag has appeared in many places on the web – players wanted information on RDO‘s condition to reach the largest possible audience. The goal was achieved, as #SaveRedDeadOnline was even noted by Take-Two CEO Strauss Zelnick.

And while this can be considered a success, the hopes of fans of RDO for new content were dashed by a statement that “any future content updates will be up to Rockstar.”

Willing or not, it’s safe to say that we will come soon to see the finale of RDO tragic demise. Although it won’t happen officially, as the game’s servers will continue to be maintained, many players will remember July 13 precisely as the end of the online western mode.