Patch 1.13 for Gran Turismo 7 Adds Three Cars and a Track

After almost two months since its release, we finally got some new content in Gran Turismo 7, in the form of three cars and an additional track.. These and other features are included in today’s patch 1.13.

Here are the vehicles that have been added to the game today:

The first of the models mentioned is a twin equivalent of the Toyota GR 86, which we have had in the game since the premiere (actually, we could enjoy it back in GT sports). The second one is a racing version of the first. The third car has joined the likes of Daihatsu Copen and Honda Beat as a representative of the so-called kei cars – Japanese “toyrides” that make up for their poor performance (their engine power does not exceed 65 hp) with pleasant appearance and quasi -sports driving qualities.

To put it briefly – not only is the number of new cars modest, but they themselves do not necessarily make your heart skip a beat (and in any case, they don’t make me suddenly want to go back to the GT7 after a month’s break).

New Track and Other Highlights

Unfortunately, I have to dampen your enthusiasm – assuming you felt any when you read about the new track. It is not a completely new facility, but just an an alternative, “24-hour” variant of the Spa-Francorchamps circuit, which has been available in the game since launch. It differs from the basic version with… slightly shifted pit stop. Really, you won’t even see a single modified corner here. And I thought Polyphony Digital couldn’t offer you anything more disappointing than having the traffic reversed on one of the existing tracks…

Alright, we’re still left with the “other highlights”. Patch 1.13 also introduced a number of minor changes. The full list can be found here – Below I have listed the more important points.

As for what the game lacks the most, which is a variety of competitions in which we could use the widest possible range of vehicles – patch 1.13 changed very little. Maybe we will see more attractions of this type (finally) in May? I hope that next month we will also see the promised option to sell owned vehicles. 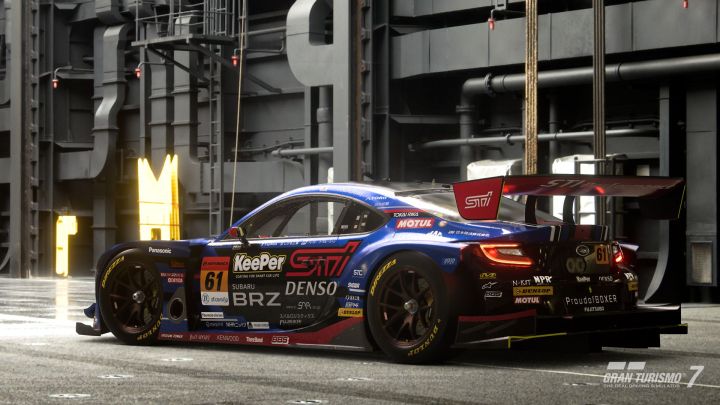 Subaru BRZ GT300 – at least we are getting an authentic race car, and not just another imaginary car from the likes of Polyphony Digital’s Gr. 3 or size 4.