Welcome to another review of the week’s most important launches on Steam. The next few days will be filled with many noteworthy debuts, among which there is no shortage of both big-budget productions and indie titles.

The premiere of the week is Marvel’s Spider-Man Remastered (August 12).

Sony continues to port its console hits to PC. The latest fruit of this labor will be Friday’s release of Marvel’s Spider-Man Remastered, a port of the PlayStation 4 hit that has sold over 33 million copies. It is the biggest bestseller in the history of games released by Sony.

The project is considered one of the best superhero games ever, and the participation of Nixxes, a studio specializing in PC ports, guarantees that the PC release will present a very high level.

in a few hours Tyrant’s Blessinga tactical turn-based RPG inspired by classic Japanese representatives of this genre, will also go on sale .

Of all Monday’s launches, it is Tyrant’s Blessing that’s on the largest number of Steam user wish lists.

One of the most important premieres of the week should turn out to be the early access debut of Farthest Frontier.

It’s an expansive strategy game from the authors of the excellent Grim Dawn, in which we will lead a settlement in a land modeled on the Middle Ages. The game will emphasize both combat and economic development of the village.

Timothy and the Tower of Mu

Tomorrow we will also be able to play Timothy and the Tower of Mu. It’s a hardcore Japanese platformer with retro graphics, in which we’ll try to reach the top of a tower filled with traps and monsters.

You can download the demo on Steam and see if the announced extreme difficulty level will appeal to you.

Farthest Frontier won’t be the only big strategy game release of Tuesday. This is because the same day will see the release of the highly anticipated Two Point Campus, a new production from the authors of the hit Two Point Hospital. This time, instead of a hospital, we will manage a university. The creators approach this subject matter in a very humorous way (in their typical style).

Tuesday will also see the release of SGS Operation Downfall, a strategy game presenting an intriguing alternate history in which the Manhattan Project was a failure and the Americans failed to develop an atomic bomb. As a result, the Allies are forced to launch an invasion of Japan.

The game’s authors specialize in strategy games and have to their credit, among others, the warmly received SGS Winter War (86% positive ratings on Steam)

So going on sale tomorrow is stereo boy. It’s a cute isometric puzzle game about a robot-astronaut trapped on an alien planet. The puzzles will revolve around teleportation between two parallel dimensions.

Cult of the Lamb

One of the biggest debuts of the week will undoubtedly turn out to be Cult of the Lamb. It’s an action game with roguelike elements, in which we will play as a lamb developing its own sect of fanatical followers.

The game will combine heavy themes and high levels of brutality with a humorous atmosphere. In addition, the game’s arcade mechanics will be enhanced with strategic elements.

On Thursday Parkasaurus, a popular strategy game about managing a zoo of dinosaurs, will receive its first expansion in the form of Sea Monsters. As the title suggests, the DLC will enable us to enrich our park with aquatic animals.

This week will see the debut of a new game from the authors of Vostok Inc.. In Arcade Paradise we will play the role of a laundry manager, who will have to slowly transform it into a saloon with arcade machines.

Interestingly, the developers have prepared 35 fully-functional arcade games, so we will be able to play each acquisition in person.

On August 11, Axiom Verge 2 will go on sale on Steam, ending a year-long period of exclusivity for Epic Games Store.

This metroidvania game has received a warm reception – on Metacritic the average rating of the PC release is 78%.

Fans of unusual simulations can look forward to the release of City Eye. This game, developed by Polish studio Nesalis Games, will enable you to play the role of a city surveillance camera operator. 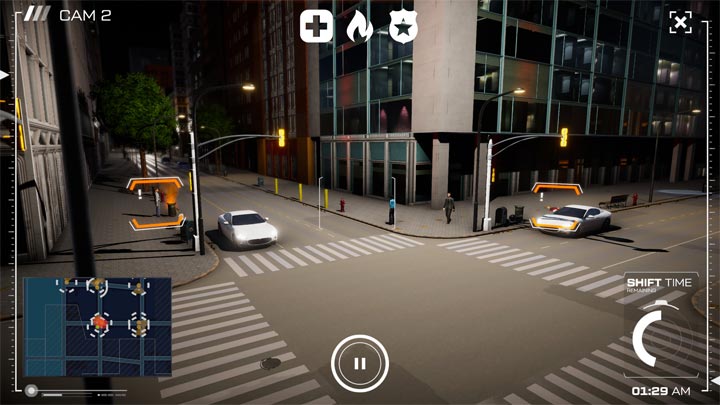 moondrop wants to refresh the mechanisms of agricultural RPGs like Stardew Valley by enriching them with roguelike elements. We’ll be farming on a mountainside, where after each arrival of fog the terrain is completely transformed, removing everything we’ve achieved, but enabling us to keep the harvested crops.

Space Tail: Lost in the Sands

On Friday, we will also play Space Tail: Lost in the Sands. It’s a free standalone game designed as a prelude to the lovely Polish 2.5D platformer Space Tail, which is due for release later this year.

The last notable release of the week will be Saturday’s debut of Rasetsu Fumaden. It’s an action jRPG that will take us to Japan of the Edo era. The gameplay will focus on combat using melee weapons and an extensive arsenal of spells. A demo is available on Steam, enabling us to check out the title before purchasing.