New Battlefield could be a hero shooter

Battlefield 2042 turned out to be a very controversial part of the series, not only due to technical flaws, but also due to changes to the franchise-typical elements. If the new rumors are to be believed, the next installment could piss off traditionalists among the series’ fans even more.

According to these reports, the next will be Battlefield should be a game from the category “hero shooter”, or a title like Overwatch or Apex legends, where players can choose from an extensive gallery of unique heroes with a variety of special abilities.

The new Battlefield should also offer a battle royale mode. Until the project is officially announced, these revelations should be treated with caution. Even so, we believe them because their source is Tom Henderson. He is one of the most reliable informants when it comes to DICE games, so his information should at least be considered. 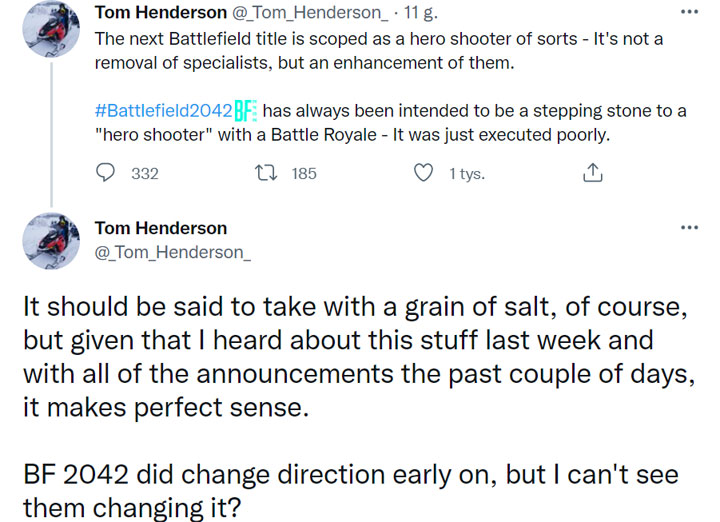 Henderson warns that DICE’s plans may still change. Games in the series often go through big changes during development, but he got the above information on the next part last week and thinks the overall concept of the project will most likely be kept.

As he points out, this direction would make sense for the series. Battlefield 2042 introduced specialists instead of generic character classes. According to Henderson, that solution was to prepare the ground for the franchise’s transition to the hero shooter category, and the next part will expand that concept.

It’s worth noting that Electronic Arts had experimented with this approach in Battlefield Heroes back in 2009, which relied heavily on it Team Fortress 2. It was a spin-off, however, and now DICE could bring similar ideas to the main series.

Battlefield 2042 was released on November 19th. The title appeared on the PC at the same time (both on steam and origin) and PS4, PS5, Xbox One and Xbox Series X / S. The ones who bought that gold or Ultimate Edition, could start playing a week earlier.