MultiVersus is a game that features a pretty wild cast of characters that seem packed with unique, quirky elements. Of all the characters—and all their unique toolkits—Batman feels the most “normal”. But don’t let that discourage you, Batman is an extremely effective character that has an incredibly focused set of tools.

One of the best things about Batman is that he is more than capable of going toe to toe with every character in the game, and you don’t have to juggle as much information in your head as you do with other characters. Batman May just be one of the most beginner-friendly characters in the game for that reason alone.

Batman is a vertical bruiser. Of all the characters in the game, Batman’s classification really gets to the heart of his character. Sure Velma may be a “support” character, but she is also, essentially, a mage. There is nothing like that with Batman. His whole thing is being in your face, and attacking relentlessly. He is one of the game’s most relentless rushdown characters, and he feels like he is, essentially, the archetypal bruiser of MultiVersus.

As for the vertical bit, once again, that is exactly who Batman is. Almost all of his kills are likely to be at the top of the screen or the bottom of the screen. He has great attacks for hitting above and below. This is all a big part of Batman’s appeal. You will enter into every encounter with a pretty clear gameplan. A game plan that gets more obvious when you really dive into his moves.

Related: MultiVersus: How To Unlock Every Character 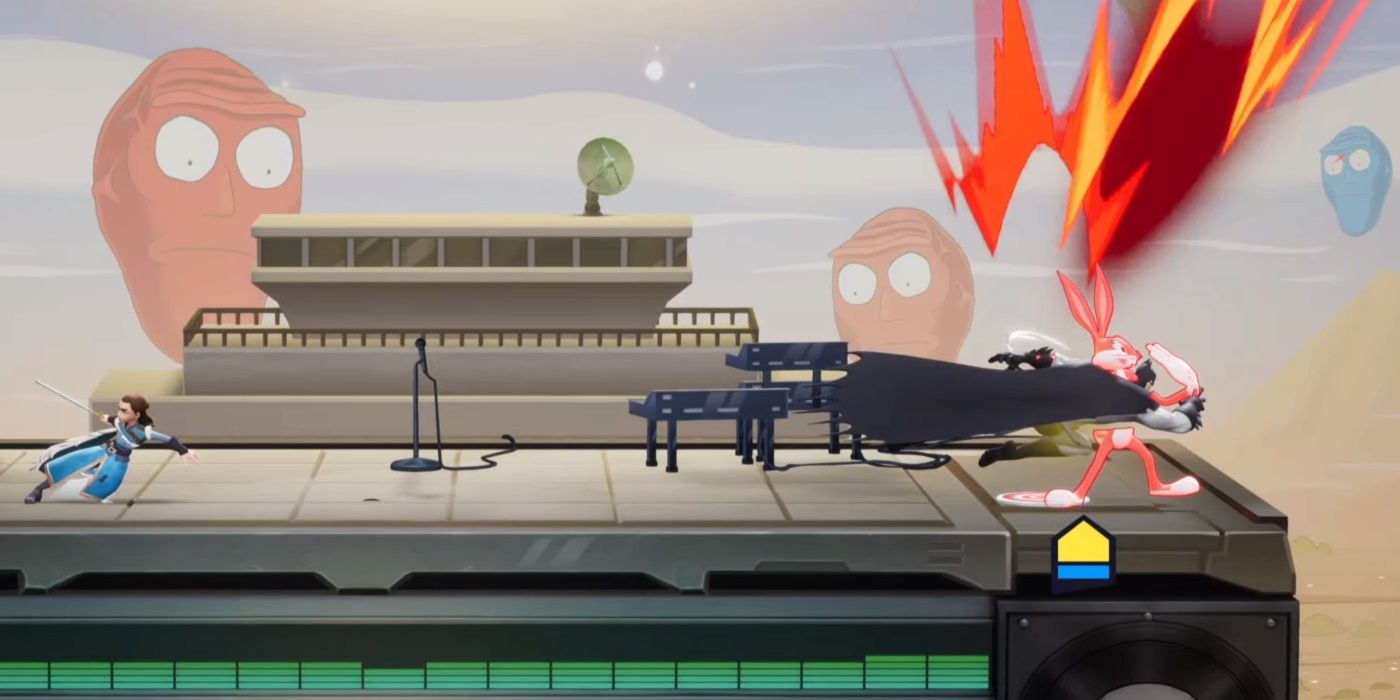 Batman wants one thing in MultiVersus: to get close and throw fists. Thankfully, his kit is service built to let him do just that. Batman does not have a single armored move, so people can interrupt everything he does which is, unquestionably, a bummer. Thankfully, he has his trust Batarang. The Batarang will travel somewhat slowly in front of Batman, helping to shield his approach. You are going to be constantly using this thing to help make your approaches safe.

Speaking of approaches, you have some really great moves for getting in. Your Crashing Justice attack is a divekick and has an excellent hitbox, the Bat-Strike is super speedy and is an excellent way to approach as well. Beyond those, you have your grappling hook, which is a great way for Batman to get into the mix. You can use this attack in the air or on the ground. Remember to shield yourself with the Batarang, otherwise you could be heading face-first into danger.

When an opponent is suitably softened up, make sure to peg the with your bomb. This is a great way to set up a kill, especially if your opponent is banged up. Deliver the bomb via Batarang. This is super hard to avoid, especially if you do it from your Smoke Bomb shroud. Which, by the way, is a move you should be using frequently, your Smoke Bomb slows your enemies and buffs you and your teammate.

So, your whole strategy is going to be sticking to your enemies, softening them up, then, when you have them near death, start looking for an opportunity to use your Rising Bat special or your Bat-Kick spike attack. As those are your most reliable ways of finishing off opponents. Most of your kills will be at the top of the screen!

Batman works alone. Well, he doesn’t, you can use him for teamplay, obviously, but he is typically doing his own thing. The lone exception to this is, of course, his Smoke Bomb. This is an especially good move when your partner is a projectile user, as they can stand in it, attack opponents with their projectiles, and be immune to any coming from the other team. Your partner can also help you out by retrieving your Batarang for you.

Batman’s got two signature perks and both are bangers. One will help your Batarang apply the maximum stacks of weakness if it hits coming back the other way, and the other applies an AOE attack to the end of your grapple. Personally, since we are constantly using the Batarang, we prefer to go with the Bouncerang Signature Perk, but we think that Precision Grapple Perk has a lot to offer as well. We encourage you to try both out and see what fits your style better.

Next: Changes To Make MultiVersus Go From Good To Great