The latest installation of the soccer series by Electronic Arts recorded a very successful debut, at least in terms of player numbers. EA Sports announced that during the first week FIFa 23 was played by more than 10.3 million players, which is said to be a record for the series.

A cursory glance at the stats from Steam confirms this claim (via Steam Charts) Admittedly, in terms of the concurrent number of people playing the game, this year’s installation has yet to break the record of FIF 22 from five months ago, but at launch FIFA 23 performed much better.

During the first week since its debut, the 2021 version had a max of a little over 51,000 Steam users playing at the same time. The record of FIFA 23 was nearly 75,500 players, and each day the game attracted at least 59,000 simultaneous users. Arguably, the equalization of the PC version with releases for 9th-gen platforms played some role here.

At the same time, let’s remember that FIFA 23 is also available on five consoles (PS4, XOne, PS5, XSX/S and Nintendo Switch), on which the series traditionally sells better than on PCs (although this is difficult to confirm in recent years due to the lack of official data).

The popularity of the latest installment pleases Electronic Arts, but fans probably do not share the publisher’s enthusiasm. FIFA 23 is, in fact, bombarded with negative reviews on Steam other Metacritic. It already has more than 13,000 reviews on Valve’s platform, but only 38% of them are positive.

Leaving aside the highly supportive and, full of emotion…, but not details, “reviews”, what strikes the eye is primarily Complaints about the inability to run the game on PC. This is supposed to be caused by the new anti-cheat system, with some advising to simply run FIFA 23 as administrator. 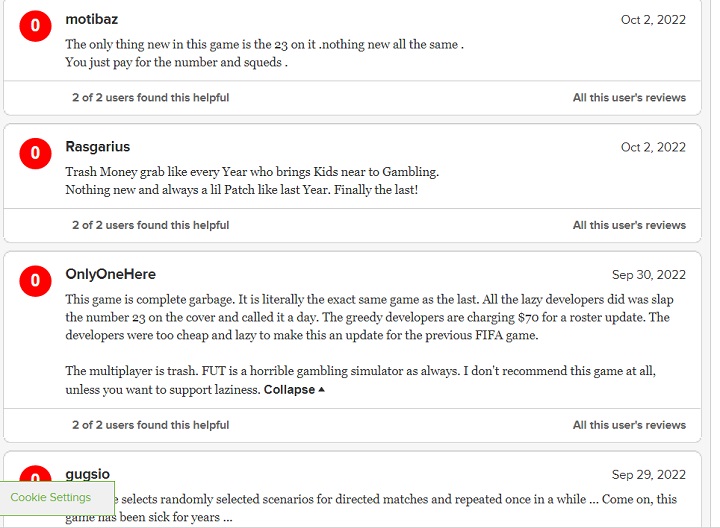 Sometimes you have to consult the experts. Source: metacritic.

Users also mention Problems with the game’s stability, which some say is also caused by the new anticheat. If you also have problems with this Electronic Arts invention, we encourage you to take a look at our guide.

What about consoles, though? Here, too, the game is heavily criticized. Although ratings of 0 (or even 1-3) are difficult to take seriously (as are reviews with sincere confessions like “I haven’t played”), it is nevertheless possible to notice one main theme in these complaints, which for years has been as integral to the series as the ball and goals. According to the fans, FIFA 23 does not introduce major innovations compared to its predecessors, even inheriting some of their mistakes.

In addition, it is possible to find mentions of unsatisfactory gameplay, for example, parallel passes, generally slower pace of matches or complaints about “lack of importance of skills” or player stats.

Unfortunately, most of the “reviewers” did not see fit to go into detail, so it’s difficult to assess how many of these “glitches” are still valid, and which have been fixed in post-release updates (for example, the behavior of goalkeepers has been improved).

Duplicate packs are not the only reason to complain about FUT. Source: u/CalimeroX on Reddit.

oddly enough neither on Steam nor on Metacritic is there actually any mention of trouble with FIFA Ultimate Team (leaving aside, of course, general complaints about microtransactions and the very existence of this game mode). This is all the more strange, since problems with FUT are a frequent topic on social media – from complaints about a wave of duplicates in packs to the failure of the transfer market.

EA has already promised compensations, although it is questionable whether the free packages will appeal to all disgruntled players.

How to set up two-factor authentication in League of Legends