Fan spent the last 5 years building a city in Minecraft; Started on the iPhone

There is no shortage of extremely ambitious architects and builders among Minecraft players. One of them is Reddit user Memesmakememe, who presented a five-year project to his own city.

The player started building the metropolis at the age of 13 and now, after several years of work, decided to go for it indicate his creation. Interestingly enough, he started working with an iPhone but, as he claims, the project got so big that he was forced to switch to the PC.

“I started this world on my iPhone 4S Minecraft Pocket Edition. Maybe 2 years ago I switched to Win10 out of necessity because the world had grown to over 200MB and my phone just wasn’t going well. I am aware that there are tools out there to convert my world to the Java edition and I have played around with the idea many times, but the amount of work it would take to convert my custom textures to Java got me away from it held. I also just find that I have such a deep understanding and feeling for the foundation that I might as well go on because it’s just more stable (…) “ 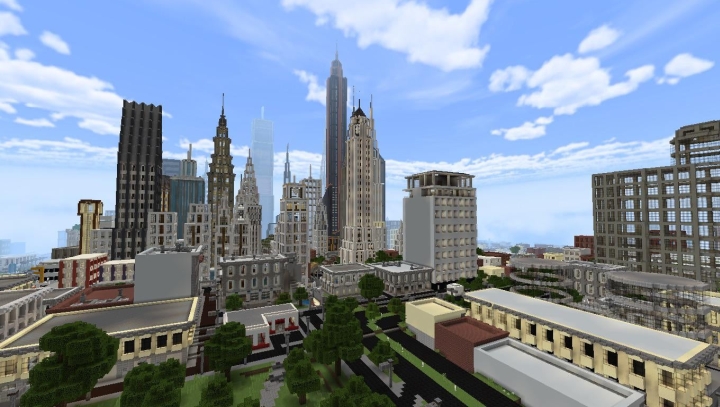 The author himself doesn’t know how big his city is, but what we see in the pictures is supposedly about half of the metropolis created (not counting other cities in this particular world). Each building has been built from scratch and is not a copy of existing structures. On the texture package itself, on which the project is based, the player worked independently, although these are only small improvements to the original skins. The agglomeration is not yet complete and the Creator himself does not know if it will ever be that way. He doesn’t even have an idea what to really do with his world.

“I’ve thought about the city a lot because it would feel like a waste not to do something. I think you’d be interested in YouTube, but I don’t think I could turn it in a fun way. I’m also so late in construction that it would be really difficult to explain certain design decisions, my plans with the city and other shit, and require a lot of boring ass displays. I will post a download sometime in the future guarantee, but that may be YEARS in the future. “

Many commentators admire the determination and talent of the Creator. The builder himself emphasizes that he would never have lasted so long without his true love for games and architecture. Unfortunately, as he admitted, he couldn’t become a civil engineer in real life, so he decided to develop his ambition in this field with the help of. to realize Minecraft.

“(…) First and foremost, that’s just one way for me to live out my architectural urge. Unfortunately, dreams got in the way and I’m studying computer science instead of architecture because my girlfriend is a film student and one of us actually needs money deserve, lmaoo, “summarizes memesmakemememe.

Everything You Need To Know About Evokers In Minecraft