ESIC on the rise of suspicious esports bets, moving to an international esports tribunal model and scaling up, plus other takeaways from London’s 2022 ESIC Global Esports Summit

As the inaugural Esports Integrity Commission (ESIC) Global Esports Summit comes to a close, Dom Sacco looks back on some of the discussions and points made by industry figures at the London ExCeL venue.

The event aimed to produce a content track that avoided the usual ‘esports 101’ advice and to actually make progress on challenges in the industry – so did it deliver? Here are some highlights, plus some future plans from ESIC at the bottom of the article.

‘Our product is emotion’ – Carmac

Michal ‘Carmac’ Blicharz, VP of pro gaming/product development at ESL, delivered what was arguably one of the highlights at the ESIC Global Esports Summit.

His talk cut through a lot of the noise of other keynotes in the space, to focus on the heart of esports: moments, memories and the human side of esports. He spoke about building a platform for players to create these big moments and show their emotional side.

“Our purpose is to make sure players are emotional about this [Intel Extreme Masters] event,” he said. “They see pictures of older players who have picked up the trophy in the past. They’re ascending to greatness.

“Esports are a platform for players to show their talent, but to become a different version of themselves too. We try to convince the players that if you win this event, you become more than number one.”

Carmac used the example of Ukrainian CSGO player S1mple who spoke about the Ukraine was at the recent IEM, and how, in doing so, he transcended from being the best CSGO player, to an esports icon.

Graham spoke about the benefits of Riot being in charge of its own leagues (ie having the resources to do so), the benefits of its European Regional Leagues (ERLs) like the UK/Nordics’ NLC, but also working with more external tournaments like the Asian Games and how Riot can learn from this for other potential leagues in the future. For example, Riot has toyed with the idea of ​​potentially running a League of Legends world cup.

How tech can change esports

British esports journalist and personality Richard Lewis was sadly unable to make the event and deliver his talk to everyone wanting a piece of esports. But standing in what James Dean, director of UK strategy and commercial at ESL, and he gave an interesting talk on technology – particularly the Weavr project – and how it could change how we view esports in the future.

“We utilize as many technologies as humanly possible that exist today in order to deliver contextual points and bring value to the fan,” he said. “Having a point of interaction means they give us value back, in terms of how they respond and interact.”

Weavr has looked at VR, XR and other technologies to enhance the viewer experience, with fans able to view a live 3D map and see game stats per player in real time, or view different parts of the stage and players via VR cameras.

Really interesting insight from @j1mco into VR and how that may change the esports viewer experience in the future. There was another clip of viewers watching players on stage via a VR camera #EGES2022 pic.twitter.com/b4RNPuVcvu

The current state of esports investment and regional opportunities

Dave Harris of Guinevere Capital – which has previously invested in Excel Esports among others – spoke about the continued hype around esports investment.

“Every deck on esports starts with ridiculous numbers, I hate it,” Dave said, honestly. “But there is still a lot of hype around esports investments at the moment, it’s a hot sector, especially now we’re overlaying esports with the metaverse.

“The metaverse has been around for a long time, but Zuckerberg renames his company Meta and now suddenly everyone has to put the term in their pitch decks. Esports is all about long-term gain, I think in the long-term people are actually underestimating how big the sector is going to be.”

Dave also spoke about some of the regions to invest in, and the importance of recognizing these, rather than investing in esports and expecting some kind of instant global reach.

Dave also spoke about the sustainability of esports, franchising and, in particular, he praised Ubisoft’s approach.

“Rainbow Six’s structure is a lot smarter [than some of the publisher models out there], they’re giving more revenue shares with esports teams for in-game items. That might be where we need to go [in other games too].”

Dave also looked at other organizations and the revenues they’re generating in greater detail.

What’s next for ESIC?

Ian Smith, ESIC commissioner and Stephen Hanna, director of global strategy and partnerships at ESIC, spoke about their thoughts on the CSGO spectator bug and how they handled the investigation into that, as well as what the future holds for the integrity body in the future .

You can see some of these potential future moves from ESIC in the image below: 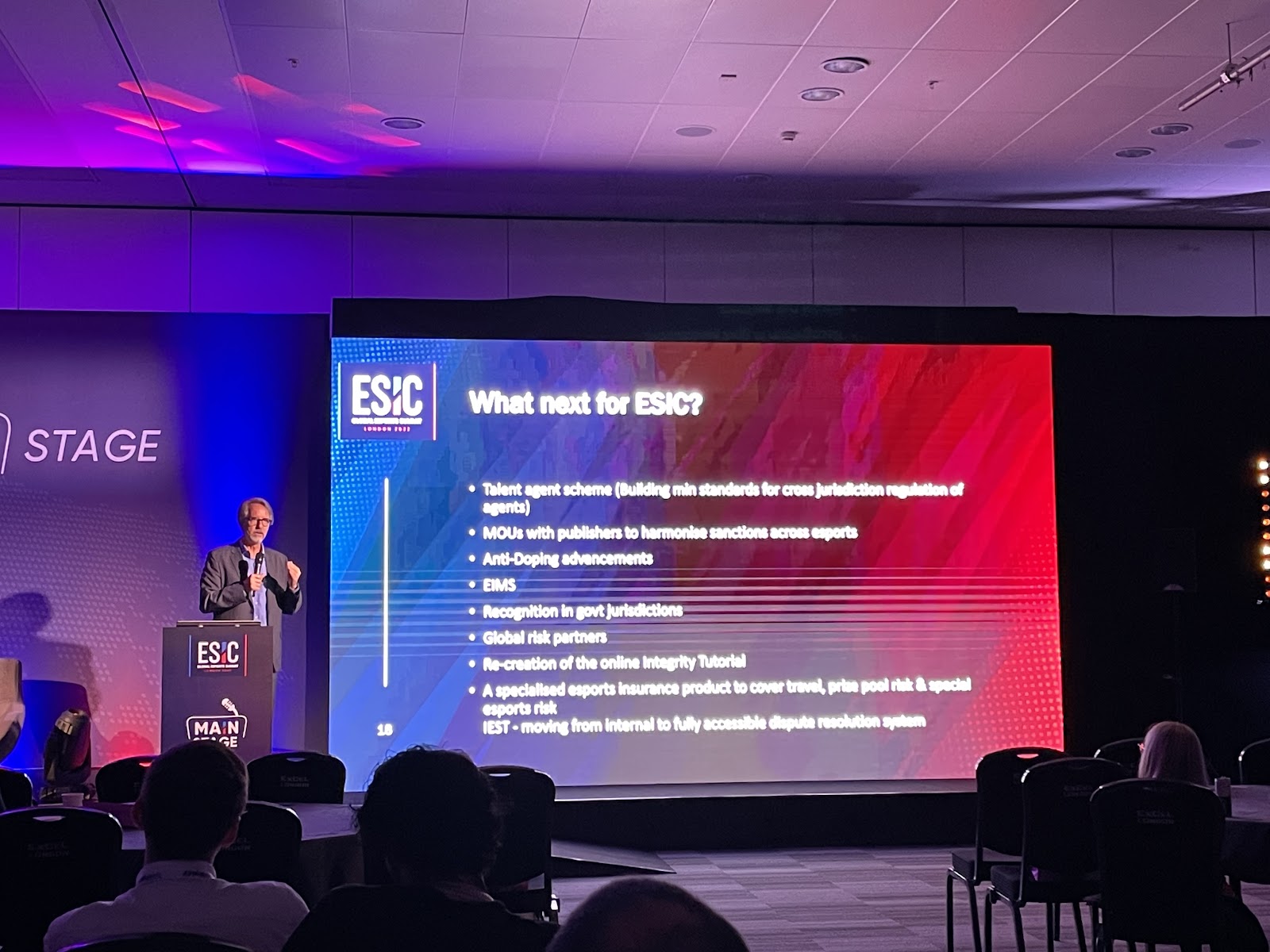 “We are about to relaunch our online integrity tutorial, because at the moment all education is being done with admins, coaches and more on zoom, which is fine, but we want to give better access to this to everybody,” Ian added.

“We’re looking at launching a specialized esports insurance product later this year covering travel and prize pool risks, and we’re moving our current independent disciplinary panel operation, which is internal to ESIC prosecutions, to an international esports tribunal model that will do that work as well as be accessible to external stakeholders, non-members and people from the industry.”