Back in February, I got my first hands-on moments with the MSI Stealth GS66 at a small launch event that was held at Evetech’s offices. It was the first 12th gen hardware we saw in the real world. Even more interesting was the fact that this one is a Stealth GS series notebook, which means this one has something special up its sleeve.

The MSI Stealth GS range holds a soft spot in my heart, I got my first taste of this range a few years back when I looked at the GS65; and it’s been my benchmark for ultraportable gaming computers ever since. What sets the MSI Stealth GS range apart from other gaming notebooks is the thin size of these notebooks. Considering the high-end internals, it’s very impressive to see how they managed to squeeze high-end hardware into such a small form factor.

With the MSI Stealth GS66 things have just improved. The notebook still features a very thin design with a hardware spec sheet that will make any gamer weak at the knees. For starters, it features the latest 12th Gen Intel Core i7-12700H processor with 32GB of DDR5 RAM. Yes, that’s right DDR5 on a notebook baby!

The thing to keep in mind with these ultra-thin gaming notebooks is that the engineers perform little miracles with power draw and thermal management to make sure you don’t melt your computer every time you start up your favorite game. This means that the performance between desktops and mobile GPUs varies depending on the manufacturer and engineering capabilities of that brand. At MSI, their engineers developed fan blades that are a mere 0.1mm thin, wow.

Powering your graphics is the GeForce RTX 3070 Ti with 8GB of GDDR6 memory which is a fantastic graphics card to game with. Even in its mobile form here, I’ve not managed to bring it to its knees.

Displaying these wonderful game graphics is a 15.6-inch QHD (IPS) display running at 240Hz with a resolution of 2560 x 1440. The high-refresh-rate capabilities allow you to push supported games for a smoother gaming experience. 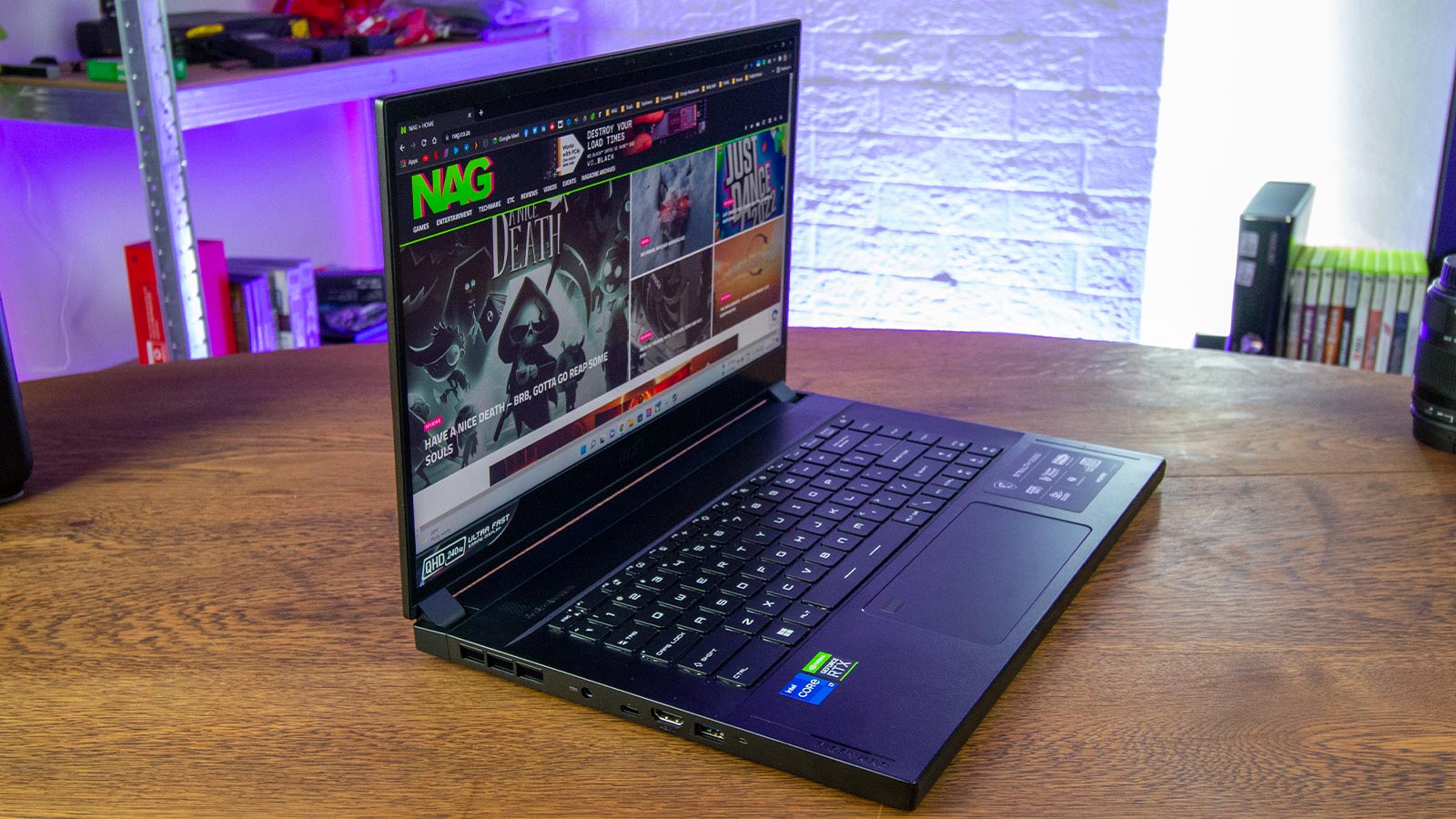 With graphics and performance capabilities sorted, the next thing that the MSI Stealth GS66 gets right is audio. The Duo Wave speakers by Dynaudio are loud, clear and have enough bass to make you feel your opponent’s footsteps.

Another aspect of the MSI GS series I also like is the subtle styling of the hardware. These notebooks are not trying to be verbose and shout to everyone around you that you like to game. The all-black design with per-key RGB illumination looks very smart and if you work in an office environment, no one will be the wiser that you are rocking one of the best gaming notebooks around. 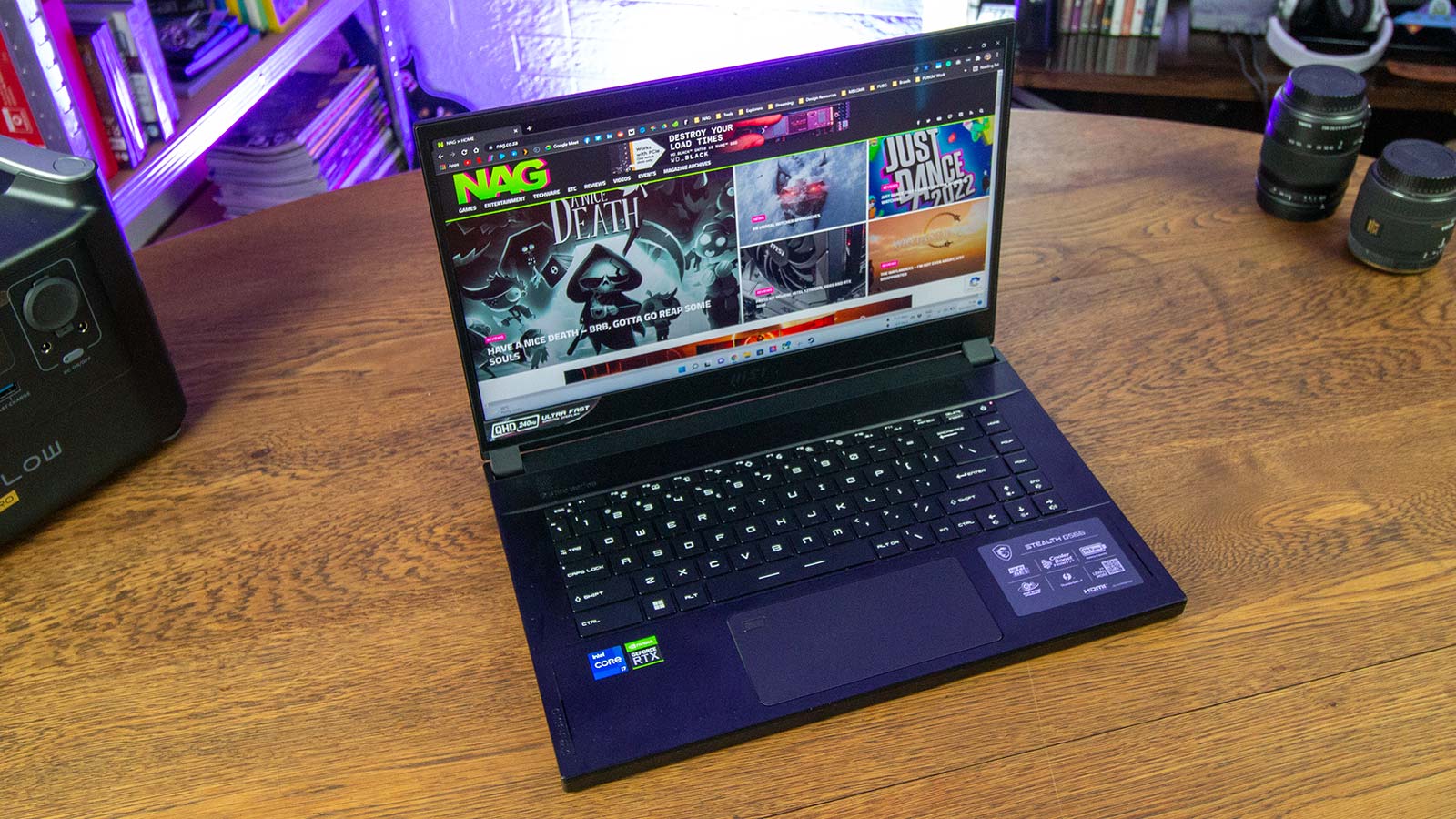 The MSI GS66 Stealth also features an impressive 99.9 watt hour battery that can be charged via the bundled (240w) AC adapter, or any Thunderbolt 4 (USB-C type) charger or battery bank.

As someone who has long been a notebook gamer (because I use my notebook for work too), I’ve become very particular about what I want and need from such a device. In terms of elegance vs performance, there is no other notebook on the market that I’ve seen that can complete with the MSI GS66 Stealth. For just under R60,000, this isn’t just your average gaming device but if you need a powerhouse computer that can run any game while you wait in the boardroom for your shareholders to arrive, this notebook is it.

The MSI GS66 Stealth is an ultra-thin gaming notebook that almost defies belief. It has limited RGB and a high-end spec sheet that will make any gamer weak at the knees.

Can be charged via Thunderbolt

Not for entry-level budgets