Microsoft has officially confirmedthat on August 23 this year Death Stranding will be added to the PC Game Pass subscription.

It is worth noting that the press release only mentions the original version of the game, not the expanded edition titled Death Stranding: Director’s Cut. 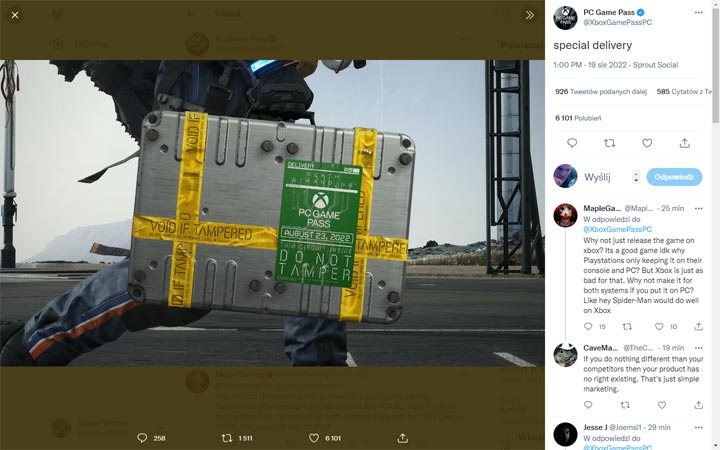 There are many indications that Death Stranding will soon be included in the subscription offer of the Game Pass service.

Adding spice to the whole matter is the fact that the publisher of Death Stranding on consoles is Sony. The PC editions of the game, as well as an expanded edition called Death Stranding: Director’s Cut, were released under the banner of 505 Games. However, the cards for these games on Steam read that “DEATH STRANDING is a trademark owned by Sony Interactive Entertainment LLC.”

It’s hard to imagine Sony agreeing to put a game on Microsoft’s service. In the case of Death Stranding however, the situation with the rights to the brand and the game itself may be more complicated. It is, after all, merely a port of a PS4 exclusive, which Sony itself has not released on PC. So it’s quite possible that the contracts between the Japanese company and Kojima Productions contain provisions that will enable the developers to put their work in Game Pass.

Such a move may also be facilitated by the fact that this is only about making the PC version of Death Stranding available as part of Game Pass. By playing via streaming within xCloud, however, the game could potentially be played by Xbox One and Xbox Series X/S owners.