December will mark two years since the release of Cyberpunk 2077 and although during that time we have received only patches and updates, which have not likely brought much additional content that could extend the gameplay by many hours, there are many players in the game every day . In recent times, the popularity of cyberpunk has increased significantly, which is clearly evidenced by the stats from Steam database.

Popularity of cyberpunk began to grow as soon as the rumors about patch 1.6 surfaced and after the tweet teasing the game’s first, and as it turns out, only story DLC. The increases continue after the release of the update and the official announcement of the DLC called Phantom Liberty. It might seem that gamers will quickly get over the temporary hype, but the release of Cyberpunk: Edgerunners also did its part and made sure that fans do not leave Night City.

According to the SteamDB database yesterday, ie, on September 15, as many as 36,806 users played the game, which is the best result in a long time, and it should be noted that this is only data from Steam. If one were to add up the number of people playing cyberpunk through apps of other stores and on consoles, the result would be much higher.

At the same time, it is worth noting that the title returned to the ranks of the most played single player games on Steamsurpassing in this regard even Elden ring. 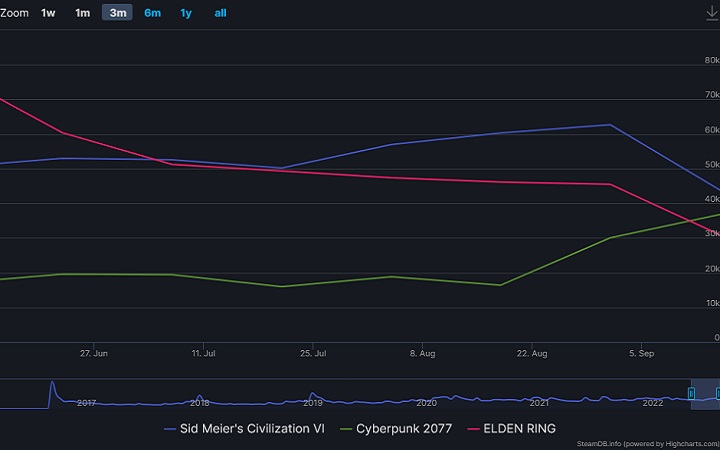 The impact of the show on the game’s popularity

With the debut of the first season of The Witcher on Netflix, interested in The Witcher 3: Wild Hunt suddenly increased. Now we see a similar situation with cyberpunk. The great popularity of Edgerunners was also noted by Radek Grabowski, who is responsible for the PR at CD Projekt RED. Via Twitter he boasted the information that Cyberpunk: Edgerunners is ranked as the fifth most watched production on Netflix.