The release of the new Call of Duty is just around the corner, and with it, players will get their hands on the sequel to Warzone. Probably for this reason Raven Software decided to release, as they put it, “the last big update for Call of Duty: Warzone in this era.”

The update hits the players midway through the fifth season with an announcement on the developer’s official website. The developers briefly summarized the game’s development so far, noting in particular changes that improve Quality of Life, or QoL for short. Also the latest major update for the first war zone contains a good deal of them.

The developers have also made changes to the playlists, which in the coming weeks will include the “greatest hits” among the game’s existing modes (as well as two new ones). The sets will change weekly until October 20. 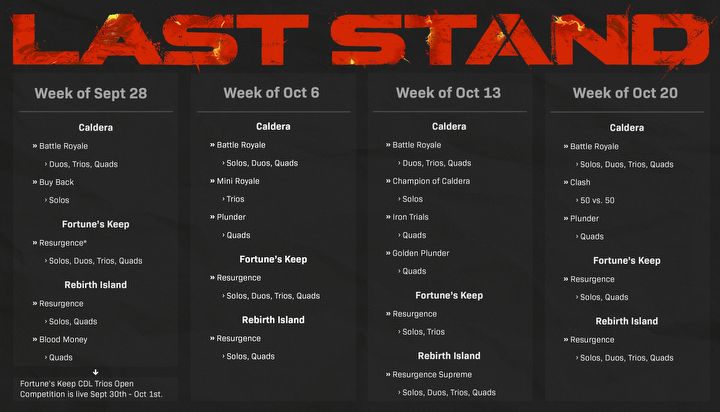 Schedule of CoD: Warzone playlists for the next few weeks.Raven Software.

However, there’s more. The farewell nature of the update, so to speak, is highlighted by a new cinematic cutscene with Carver Butcher (which we will see right after the launch of Code: Warzone) and Free business cards immortalizing memorable events from the game’s history. There are references to both “broken” weapons and the “eagle child” and the “big fish” of Verdansk.

According to earlier rumors the release of war zone 2 was not supposed to mark the end of development of the first installation of this sub-series. However, Raven Software’s announcement confirms that we shouldn’t expect major new features in the original war zone. It remains to wait for the debut of the sequel, which want hit the market on November 16.