Call of Duty: Warzone 2 Could Launch Next Year

Credible rumors have surfaced online suggesting that Activision Blizzard is working on Call of Duty: Warzone 2 a sequel to the 2020 game, which is currently one of the most popular and highest earning free-to-play shooters.

The first reports about this project appeared after the publication on Bloomberg, according to which, despite the acquisition of Activision Blizzard by Microsoft, the next three installations of Call of Duty will be released on PlayStation consoles. Commenting on this article, proven leaker Tom Henderson revealed that they are this year’s sequel to Call of Duty: Modern Warfare, developed by Infinity Ward, a new game from Treyarch and CoD: Warzone 2. The last two games are expected to debut in 2023. 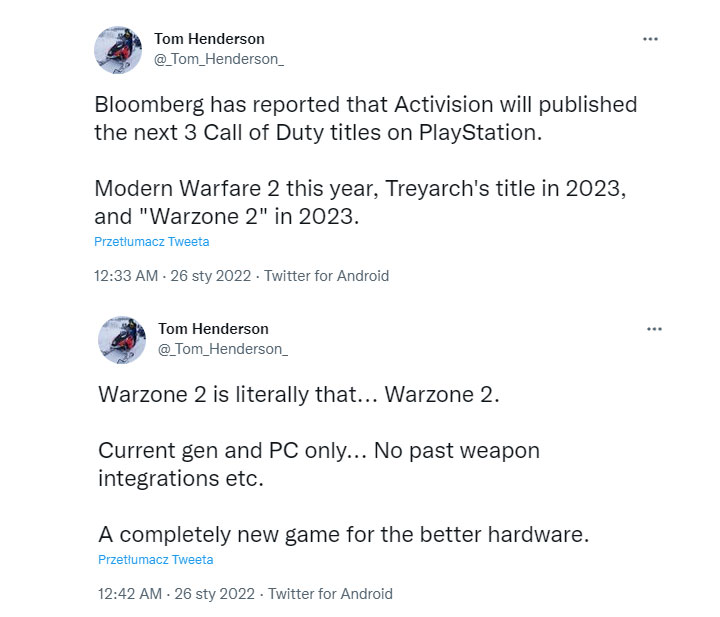 Information about the games was revealed by Tom Henderson, who became known as a reliable source of leaks about the Call of Duty and Battlefield series.

The information released by Henderson is limited. Call of Duty: Warzone 2 is to be a completely new game, not an update to the first part. The game is being developed exclusively for PC, Xbox Series X/S and PlayStation 5, and the project is expected to take advantage of the capabilities offered by next-gen hardware.

The latest two main installations of the series, as well as the first CoD Warzone were also released on last-gen consoles, which severely limited the creators’ options. According to Henderson, also this year’s follow-up to Call of Duty: Modern Warfare will launch on Xbox One and PS4. However, next year’s installations of the series, including the new game from Treyarch, are being developed exclusively for PC, XSX and PS5.

The fact that the next three installations of Call of Duty are coming to PlayStation consoles doesn’t mean it that will be the end of it. These games are simply contracted as part of the deals with Sony that Microsoft intends to honor after its acquisition of Activision Blizzard. For now, it’s unclear what the future of the series will be after 2023.