Blizzard Entertainment has always been famous for its high-quality cinematics – whether in games or trailers for those games. However, the developer has decided to celebrate the upcoming return of the Lich King with a new trailers for WoW: Wrath of the Lich King Classic prepared by a popular YouTube channel.

The video titled Journey is the work of an Internet user by the handle hurricanes. The creator became famous for his videos warmly received by the community focused around World of Warcraft.

The jewel in the crown here is without a doubt Black Temple Trailer 2020, the “trailer” in which Hurricane showed his journey to the Black Temple in the The Burning Crusade expansion. The footage has been viewed more than 2.9 million times, and some consider it better than anything Blizzard has presented in recent years.

Hurricane has long revealed that he is preparing something in connection with Wrath of the Lich King Classic. At the end of August, he posted a short teaser in which he travels with a film crew from Azeroth to the land of Northrend – the domain of the Lich King.

A lot of nostalgia (and fans)

Like user’s previous movie, Journey was not created on the game engine (the creator used octanes other Cinema 4D with models exported from Wow) and gives us a foretaste of the story from Wrath of the Lich King.

So we have the undead attacking the kingdoms of Azeroth and Arthas preparing for the arrival of the Horde and Alliance heroes. Also shown are PvP clashes over Wintergrasp between these factions, raid boss fights and many other scenes that are sure to evoke feelings of nostalgia in any World of Warcraft veteran.

The result clearly delighted the fans, as can be seen both in the comments under the trailer itself and in the posts in the social media. Especially since the video also shows characters created by Wow players (vide Blizzard’s posts on Twitter).

This is not the first time Blizzard has teamed up with a well-known content creator. In April, the official channel of World of Warcraft posted The Mythic Dungeon International tournament trailerprepared by IKEdit (to whom we also owe the trailers for Shadowlands season 4).

Platinum, in turn, has prepared a material discussing the background story of the Vrykuli race of half-gigans, and WillE was the narrator in other videos related to WoW: Wrath of the Lich King Classic.

World of Warcraft: Wrath of the Lich King Classic will debut on September 27, as announced by the developer in a post on Twitter. 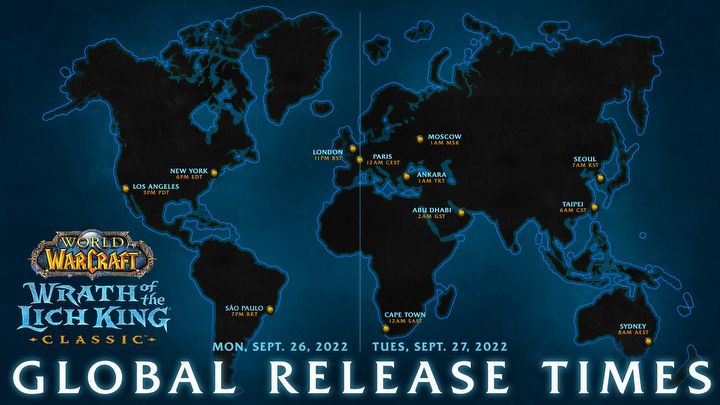 Major Update 4.0 for No Man’s Sky Just Around the Corner