Battlefield 2042 should have much better environmental degradation

Battlefield 2042 was a disappointment. The published version has so many problems that it rarely happens which planned functions were not implemented. For example, it turns out that originally BF2042 should have a much more impressive system of environmental degradation.

The source of this information is a verified insider Tom Henderson. Over the past few years, he has repeatedly shared details about the game that have turned out to be true. One of the few exceptions was his reports of an advanced system of destruction that would allow players to demolish skyscrapers and other buildings. According to Henderson, such mechanics were originally planned, however DICE finally gave up. 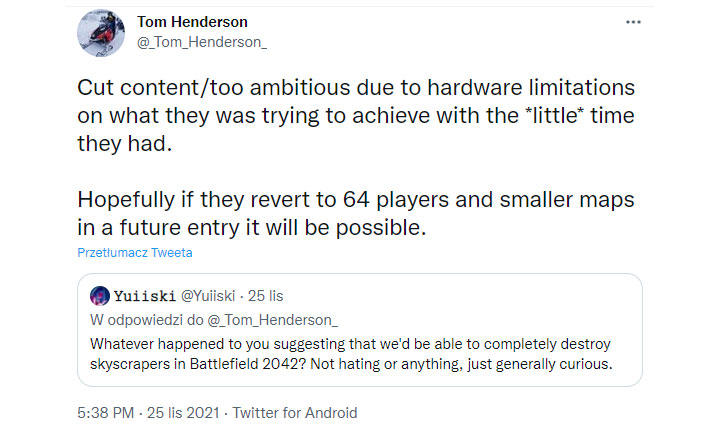 There were two reasons for giving up the idea. First, it was too demanding in terms of hardware. Battlefield 2042 increased the size of the clashes to 128 players, and implementing advanced destruction on such a scale proved impractical.

Second, there was no time. Developers were in a hurry to make it in time for its November release, and it was decided that there were other priorities. After seeing how badly technical the finished game was, it’s easy to believe that the developers wanted to save time wherever they could.

Henderson believes that DICE could revisit the idea of ​​total environmental destruction in the next game, but that would likely require reducing the number of battles to 64 players at a time.

The game was released simultaneously on PC on November 19 (both on November 19) steam and Origin) as well as PS4, PS5, Xbox One and Xbox Series X / S. The ones who bought that gold or Ultimate Edition, could play a week earlier.

Beginner Tips And Tricks For Dislyte

The Witcher 3 Gets Witcher Alterverse Mod With Quests and Locations

The Witcher’s Temeria Now in Civ 6