Source of photo above: twitter.com/ToF_EN_Official

Tower of Fantasy is developing fast, but so are the cheaters. The developers have announced bans for more accounts and clarified the penalties that the cheaters would meet in the future.

cheats in ToF are no longer fun. According to information published on both Twitter account of the game, as well as on its official websitethe number of cheaters and their actions significantly disrupt the balance of gameplay.

Moreover, cheaters are also numerous in the Bygone Phantasm mode (which involves defeating waves of enemies), which negatively affects the ranking of participants. 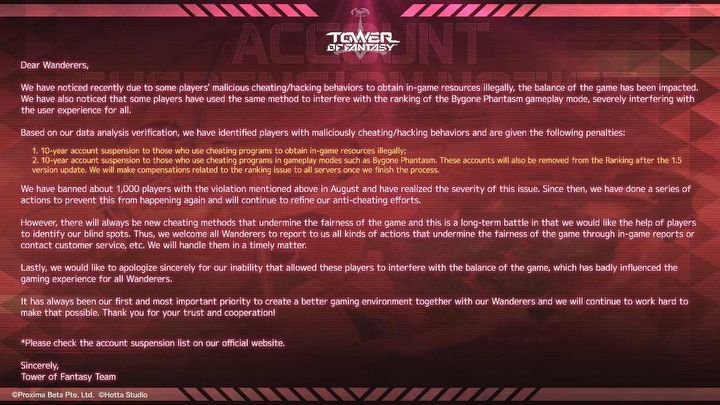 In view of the above, the developers stopped took off the gloves and suspended cheater accounts for 10 years.. Who exactly is affected by this punishment? Players who used third-party programs to get materials in the game. The same fate befell Bygone Phantasm cheaters, although these were additionally removed from the ranking in the update to version 1.5. In total, more than a thousand such bans were ordered.

Importantly, honest players are to be compensated for their participation in unequal competition. The developers are aware that their actions are only temporary. However, they assure that they will not stop and will continue to consistently fight cheaters.

In addition to the announcement regarding penalties, we also got new data on the number of cheaters. Yesterday, more than 3,000 accounts were banned from the game. This is how the number of bans on individual servers looks like.

The following list (admittedly censored) of account names and the reasons for receiving a penalty has also been made available. At the very end it is worth mentioning that although banning cheaters is like fighting windmills, ToF community appreciates the efforts of the developers who try to create the best possible environment in the game.